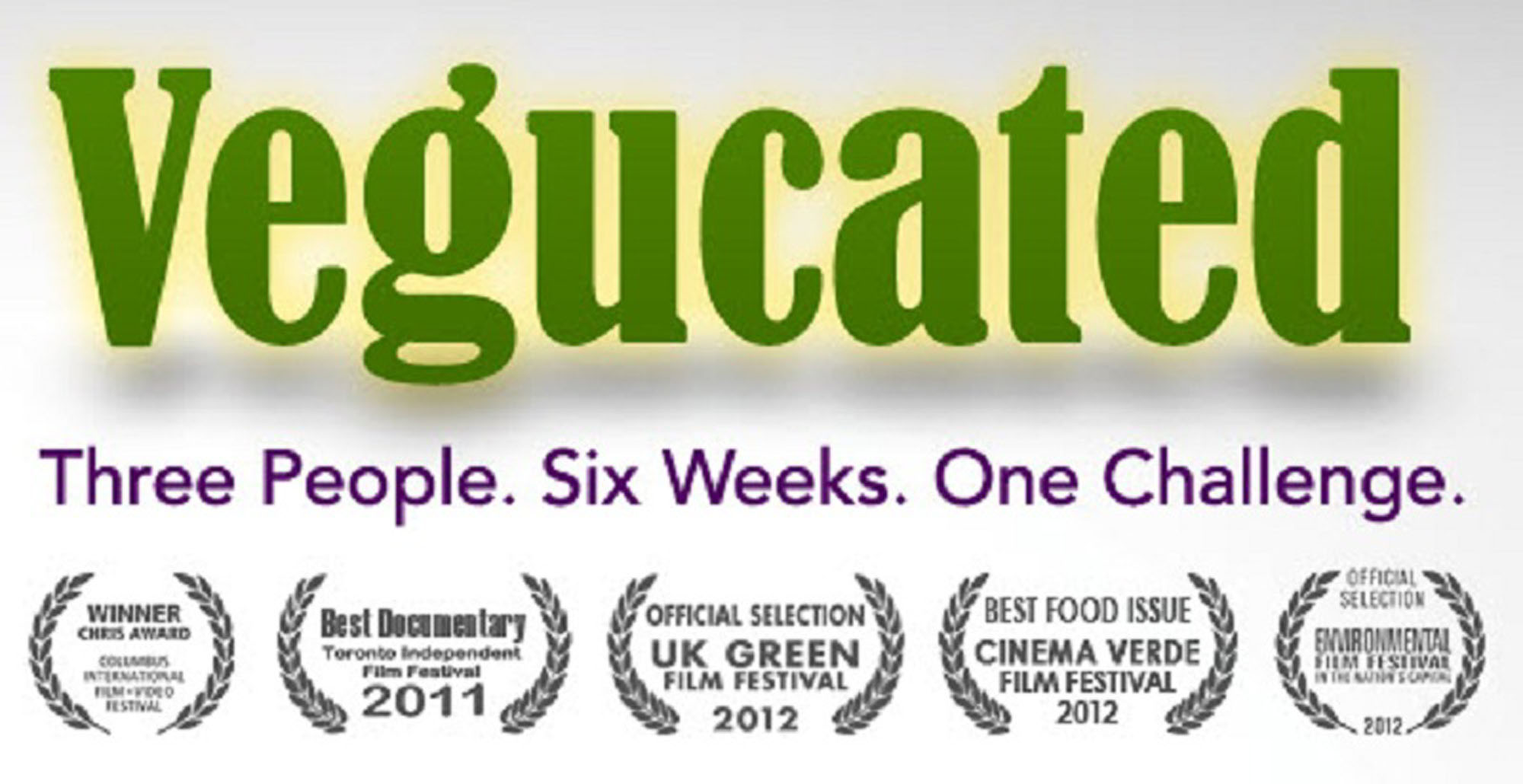 I stumbled across a post about Vegucated on Twitter and immediately looked up the documentary on Netflix.  Being a vegan myself, I was curious of the obstacles others face once their eyes are open to this lifestyle.  I originally went vegan in 2008, but had stumbled and fallen off the wagon many times in my constant battle between wanting to eat clean, cruelty-free food to returning to my old, self-soothing bad food habits I grew up on.

For me, the battle seems to be over–I hope–as I broke emotional ties with food from childhood, and started educating myself on the food industry and what going vegan meant for my mind, body, soul and of course, for animals and the environment.  I guess you could say I got Vegucated. The documentary is the brainchild of Marissa Miller Wolfson, a food activist, comedian, writer and director.  Marissa’s mission was to challenge three meat and cheese loving New Yorkers to stick with a vegan diet for six weeks.  Driven by possible health improvements, Tesla, Brian, and Ellen accepted the challenge and dove into the foreign world of veganism.

Throughout the film, it is stated that vegans are seen as weird or offbeat, or as Brian put it, “aliens”.   I can relate to that.  I have felt judged for being a vegan, most often by family members, or religious friends, who think it is unholy to reject the animals God has put on this Earth for us.

However, once these people see the difference in my health and spirits, their tune changes…somewhat.

The same seems to happen for the three New Yorkers as they learn to enjoy vegan food–even Tesla, who dislikes vegetables.  Each one had lost some weight by the end of the six weeks and had significant changes in cholesterol and blood pressure.

What hit me hard while watching Vegucated was the inside looks into the farm industry.  If you’re familiar with these types of documentaries, I’m sure you’ve seen way worse.  I have not watched Food Inc or any other expose on the food industry.  I hate seeing animals suffering, so I tend to avoid such videos, especially the ones PETA sends out.

However, seeing some of the brutality and living conditions of these animals, was an eye opener for me.  I now understand why it is sometimes necessary to force yourself to dig deeper; to see the violence.  I certainly can’t look at a steak or even a glass of milk the same way.  It reinforces why I want to be vegan and and stay vegan.

What I loved most about Vegucated was that it wasn’t overly preachy.  It wasn’t too in your face with rules and force.  My favorite part of the documentary was when Tesla had a mini-meltdown.  She didn’t think she would remain vegan and felt like a hyprocrite. (Sounds very familiar to me!)

Marissa and animal advocate, Moni Woweries, sat down with Tesla, and let her cry out her frustration.  Then Moni said something that really resonated with me.  “People think vegan is like a religion, but it’s not about rules.  It’s about minimizing suffering.  It’s not about being perfect.”

Animal products are so intertwined into everything produced in this world.  No one person can be 100% vegan, but we can do our best to reduce the carnage at our hands.  Things like Meatless Mondays and choosing to eat products that are better for animals and the environment will raise awareness of the mistreatment and brutality going on in the industry.  That’s all vegans really want — to make people aware and to minimize.  If that makes us aliens, take us to your leader.

Vegucated is now available on Netflix.

2 Comments on “Vegucated: A Must See Documentary”