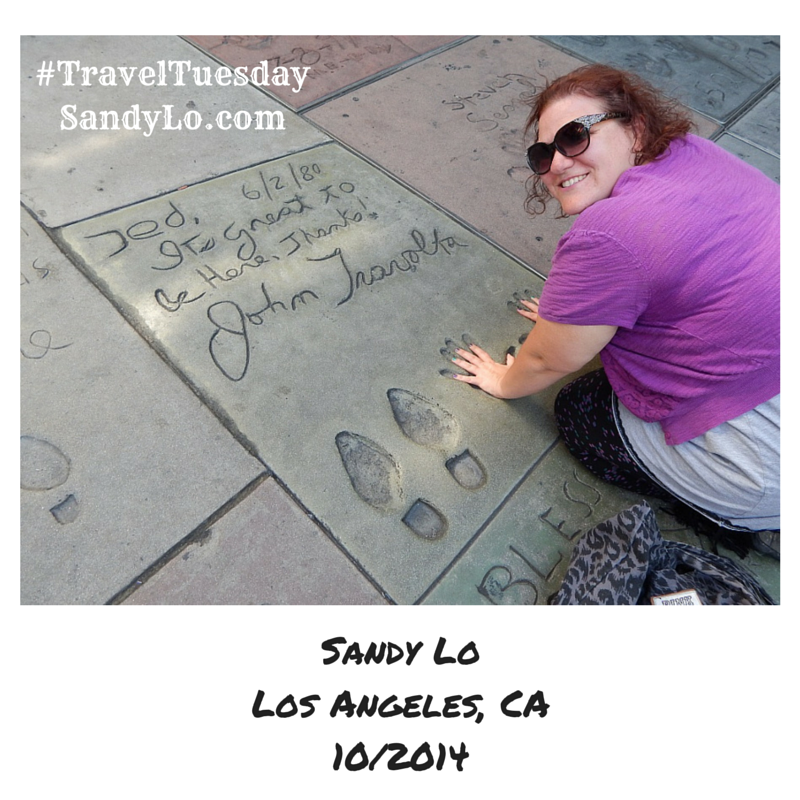 Travel Tuesday is a hashtag I started on social media to highlight some photos from my travels.  While I’ve blogged here about many of my travels, some photos or specific events were briefly described.  So, I figured it might be fun to explore deeper into certain moments/memories.  Today, I’m highlighting a photo from my first (and hopefully not my last) trip to L.A.
Los Angeles was something of a fantasy of mine from my youth.  Growing up, I was a huge movie buff.  I’ve slowed down a bit as I had gotten older, but I have seen a TON of movies.  I also used to watch shows like Entertainment Tonight and the Late Shows regularly, not to mention my reading consisted of Entertainment Weekly and Rolling Stone.  Celebrities and creating movies and music fascinated me.  I wanted to be a part of it all somehow, which is why I took to entertainment journalism instantly.  It’s also the reason my ultimate dream is to turn my novels into movies one day.
Hollywood just seemed like a magical place, filled with dreams, movie stars, and gorgeous weather.  I didn’t know how it would be when I actually went there… I was pleasantly surprised to find it wasn’t much different than my imagination.
One of the many reasons I was fascinated with movies and celebrities growing up was my love for John Travolta.  Ever since he sang my name in “Grease”, I was hooked.  I loved his vulnerability on screen, but yet it was covered behind the front of an ultra-macho Italian-American.  This prototype was something I grew up around.  Being half Italian, and being surrounded by men who always needed to act tough and seeing crying and sensitivity as weaknesses, I grew up yearning for a man to understand and just be warm and compassionate.
Well, John Travolta showed all of those things on screen, and as I learned more, off screen as well.  He became a positive male figure in my life when I really, really needed one.  One day, I would love to meet him, but traveling to L.A., seeing spots where “Grease” was filmed, and the Walk of Fame was monumental for me in its own right.  The photo I am spotlighting this week is one of me outside of Grauman’s Chinese Theatre (where “Grease” premiered in 1978).  I had a gut instinct there would be something Travolta related outside of it, and I was right.  I got to place my hands into his…well, sort of.  Even if it is just an imprint of his hands and feet, I feel like for a moment, I was a part of movie history just like John Travolta has been a part of my life history.