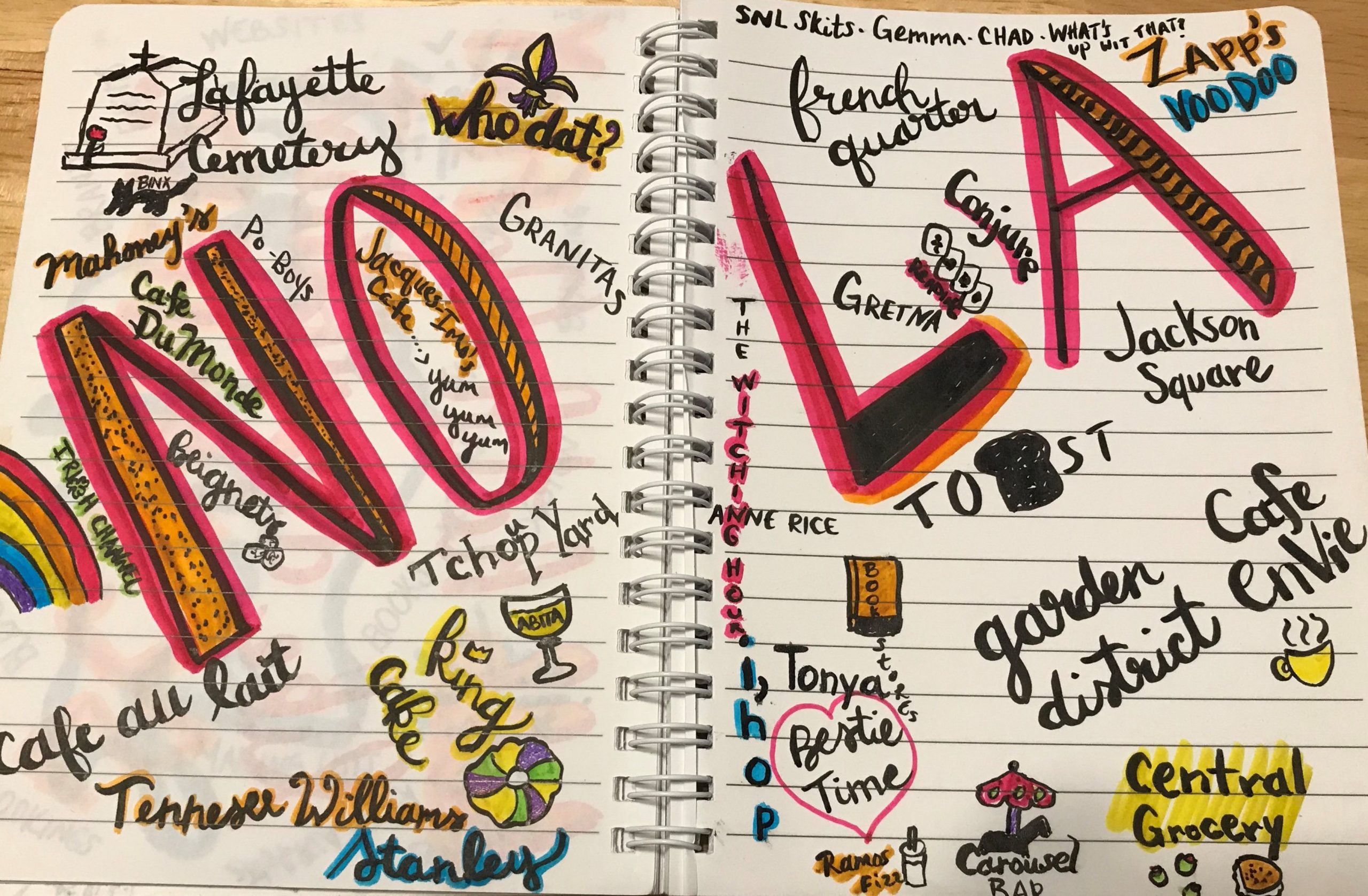 It’s been a while since I have posted any travel blogs.  I will be working on my Sicily one soon (so many photos to sort through), but in the mean time, here is my latest New Orleans trip from this past weekend.
This was my 4th trip to NOLA.  With one of my best friends, Natalie, living in this wonderful city, I am lucky enough to get to see it as a local would.  The last time I visited was 3 years ago and I had stayed for almost an entire month.  If you read that post, things were a little different… I was 100% vegan then and I was in a bit of a funk.  I had blamed the haunted city a bit for it.
Thankfully, this time it was different. While Natalie was at work Friday, I spent the morning at my old hangout, Cafe En Vie.  Although the coffee isn’t my fave here, mostly because they kept giving me medium roasts instead of dark, I enjoy this French Quarter cafe for its ambiance.  Large arched windows and a full bar gives it an authentic European cafe feel.  I did work on my laptop as some locals chatted around me and even dragged me into some conversations.
I was there for hours drinking coffee and enjoying the people around me, all while I got work done for a client and journaled.  By the afternoon, I was eager to stretch my legs and walk around exploring the familiar area. I visited the witchcraft shop next to En Vie, named HEX and then next to that is a small nook with street vendors selling things outside.  I loved hearing different stories of how these vendors made their crafts.  One guy acquired a bunch of fish scales from a dead woman and decided to make pretty jewelry out of them.  I passed on the purchase, but it was still interesting.  I did partake in buying some tea, however.  I got a decent-sized mason jar of hot lavender black tea spiked with vodka.  It was delicious and kept me warm and toasty as I walked around.
I headed to Central Grocery for a late lunch — muffuletta and some Zapp’s VooDoo chips.  Muffulettas remind me of New York and Italy — after all, Central Grocery actually imports all of their items from Italy.  If you’ve ever had a really good New York deli sandwich, then you can imagine what a muffuletta is. After lunch, I walked through Jackson Square, always a must for me… it doesn’t feel like New Orleans if you don’t go to the square!  I headed to the CBD (Central Business District) to meet back up with Natalie since she was getting off work.
On my actual birthday, we hung around the Garden District mostly.  In the morning, Natalie and Mike (Natalie’s boyfriend) sang Happy Birthday to me with a king cake.  We headed to Toast for brunch (aebelskivers were delish!) and then to Lafayette Cemetery Number 1.  Natalie claims I have been to this cemetery, but I only remember going to Lafayette Number 2.  Anyway… the cemeteries are always cool to see in NOLA and there was an adorable black cat hanging around, which added a creepy (not creepy to me at all) factor, haha.  He was too cute to be creepy! We also went to a couple of bookstores (Octavia Books and the Garden District Bookstore) where I picked up some great Tennessee Williams reads!  I’m a huge fan, which is why I made a point to go to the Carousel Bar at Hotel Monteleone the next day.  Supposedly, Williams hung out there with Hemingway and Capote back in the day.  I had a Ramos Fizz because he allegedly liked them. Ramos Fizz at the Carousel Bar inside Hotel Monteleone.

For my birthday dinner, we went uptown to Jacques-Imo’s Cafe.  Amazing!  By far the best place I have eaten in all of the times I have gone to New Orleans.  Natalie and Mike made me try this alligator cheesecake… I know, I know, I made the same face you are probably making… but think more of a quiche than dessert.  It was fantastic.  The complimentary cornbread was also delicious!  For my entree, I had stuffed catfish, mashed potatoes and greens.  Surprisingly, the greens were the only thing I didn’t like… and I always like my greens… but there was bacon in them and it made a lot of juice, so they tasted too smoky for me.  Anyway, if you visit New Orleans and venture out of the French Quarter — definitely try Jacques-Imo’s! The stuffed catfish at Jacques-Imo’s.

The next day, Natalie and I went into the Quarter because I was set on seeing a psychic.  That was something I hadn’t done in New Orleans yet… well, I don’t think I can truly knock that off my bucket list yet.  We went to Conjure, which had great reviews on their psychic readings.  However, the psychics left for the day even though I had called and they told me to come in.  The cashier wound up giving me a card reading… but not a tarrot card reading… a playing card reading!  Yes, the 52-card deck with spades, hearts, clubs and diamonds… I was game.  I figured, eh, why not?
While I don’t think the reading was shocking or super detailed, it was inspirational.  The guy was very motivating to me as far as encouraging me to be… well, me.  I liked that.  So if nothing else, I got a pep talk for $30.
That’s pretty much the gist of my trip… that and spending quality time with my friends.  Some of my favorite moments were just sitting on Natalie and Mike’s couch laughing over YouTube videos or talking about our nerdy obsessions. Have you ever been to NOLA?  Planning a trip and need some tips?  Hit me up in the comments!
Featured photo: Doodle journal created by me.