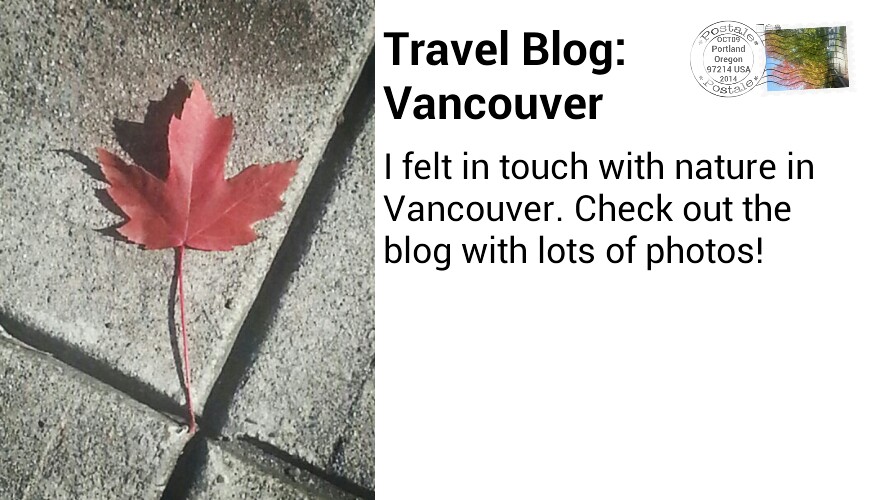 DAY 1
The 4-hour Greyhound bus trip from Seattle to Vancouver was pretty smooth.  Every time I ride on a Greyhound now, I think of my book series, “Dream Catchers”.  To think I started that series out of my many trips back and forth to college and Staten Island.  I never met anyone close to Jordan on these bus trips, but I thought, maybe this time I would.  Nope, I just met some crazy Canuck who claimed she was legally blind, which is why she needs a service dog–who was a pug.  I don’t think I have ever heard of a pug being a seeing-eye dog.  This pug certainly wasn’t trained well, either.  In fact, I almost stepped on him when I was getting my bag from the overhead compartment because he was in the aisle!  Anyway, crazy lady was fairly quiet, aside from her sloppily munching on all sorts of messy food, until we got to the Canada border.

She started shouting with her fist in the air, “Yee-ha!  Canada!  Yee-ha!”  I kept in my laughter surprisingly.  Then she began to tell me her life story, without me asking.  She even acted as if I asked her questions.  “Where was I born?” She’d say, as if she was repeating back my imaginary question.  She was born in Canada, by the way, if you were really curious.  Within five minutes of her rambling, I knew who she was staying with, the story of her parents meeting, and the day of her birth.

I was kind of worried she would hold us up at customs, but she was out of the line of questioning faster than I was!  They probably didn’t want to deal with her!  My line of questioning was ridiculous.  They basically wanted to know my every move while in Vancouver and afterwards.  The last question? The view from the patio at James’ place.

When I arrived in Vancouver, I called a taxi from Central Station.  They actually have a phone you can just pick up and it automatically calls the taxi company for you!  I went to the AirBnB, which was located in the Mount Pleasant neighborhood.  My host, James, was waiting outside for me.  We hugged and were fast friends.  James is an artist/writer/actor and he had lived in New York at some point, so we had lots to talk about.  He showed me the place, which was on the top floor with no elevator.  I really didn’t mind.  I have done so much walking, that four flights of stairs is not much to me at all.  The building is old, and the water faucet drips, but the view of the mountains is phenomenal.  My bed is right next to the patio, so I woke up every morning to that view. James and I decided to grab dinner at The Foundation, a vegetarian restaurant that is kind of like an Asian-Mexican fusion.  It’s located on Main Street, which was a pretty busy area on a Saturday night.  The Foundation had a short wait and once we were seated, the line seemed to build at the door.  It had kind of a dark, indie setting and blasted ’90s and early 2000s rap music, like 50 Cent and Nelly.  I thought that was both odd and amazing.  The food was delicious and not too heavy.  James and I even shared a dark chocolate fondue, which was heavenly.

We walked back to James’ apartment, which serves as his art studio as well.  He showed me some of his work and read me an amazing World War II letter his father had written.  He left after we talked each other’s ears off since he was housesitting for a friend.  I had the place to myself.  I slept like a log.

DAY 2
I woke up and immediately took care of some work, like my Seattle blog, and I had to find photos for my Runway articles.  I no longer have photoshop since I downsized to my tiny transformer laptop/tablet, and it’s killing me.  I felt like such a turd for not being able to adjust the resolution of my photos.  I felt bad having to enlist the help of the head fashion consultant for the magazine.  She already has a lot on her plate.

By the time I had gotten everything done and was ready for the day, it was 2pm!  The shower at the AirBnB is quite funny.  The pressure is spritzy, and super hot.  I kept having to adjust it, but I love the different contrasts I’m seeing in the places I’m staying.  So far, each place fits the host’s personalities. Anyway, without access to my phone, accept when I could get wifi, I found it somewhat impossible to walk to False Creek and Granville Island, without getting lost, and they did seem kind of far from where I was.  I wandered to the bus stop, with the help of some locals, and made it to Granville Island, all the while keeping an eye out for John Travolta, who was in the city filming a movie.  (Spoiler Alert: I did not run into him and he’s not available for interviews. Typical publicist’s way of blowing someone off.) The marina at Granville Island

I walked around Granville Island aimlessly.  I was expecting more; more of an island; more to look at.  There were just a bunch of little overpriced shops — much like Pike Place Market, except the produce was bruised and no one offered samples, or seemed all the willing to entice you to make a sale.  It similarly reminded me of Peddler’s Village in Pennsylvania, but not as cute.  It actually made me really miss Peddler’s Village, and it’s cozy holiday feel.  All the females in my family would go together sometime after Christmas.

Back to Vancouver… James later explained to me that Granville Island was originally just an eye sore with the boat yard and very industrial looking.  They had decided to build shops there, but wanted to keep the rustic feel.  I also had a hard time finding vegan items – hats, shoes, food.

I then realized Café Agro was located there, which was on my list of veg-friendly restaurants to try.  Well, it wasn’t bad, but very overpriced.  The baristas/counter people seemed not too engaged, but that was probably because this British woman and a lady with a baby had a argument right in front of me.  The Brit told the baby to “put a sock in it” any time it cried.  The mother, rightfully so, was offended and called her “rude”.

While I was eating, I realized I left my hoodie at the marina where I sat to enjoy the boats.  I was kind of far from the spot.  After I finished eating, I walked back over and to my surprise, my hoodie was still there!  However, someone hung it up on one of the shops facing the marina.  I had to climb up a cement wall and reach over a garden.  If you know me, you know I kind of have an irrational fear of ladders (big or small), and heights, and you also know how short my arms are!  But I did it, I climbed and grabbed my jacket with barely any fear!  I’ve been working on overcoming this fear for a while now, so it sounds stupid, but I’m really proud.

There was a man sitting there, watching me, and he was saying how lucky I am my hoodie was still there.  He then proceeded to tell me about a jacket he lost ten years ago, and he still thinks about it.  It was an odd conversation, but at the same time, I knew what he meant.  I had lost a jacket my mother gave me a few years ago, and it still upsets me.  We hold onto things, not because of the particular inanimate object, but because of the memories they hold, or the people they remind you of.  If I had lost my grey hoodie in Vancouver, I wouldn’t have cared really.  Sure, I’d be without a hoodie, but there are no memories attached to it…until now that is.

After I was done at Granville Island, I walked along False Creek to Vanier Park to Kitsilano Beach.  That is where I found the beauty I was looking for at Granville.  Gorgeous walking and biking trails right along the water with ducks, geese, and the sun setting with the mountains and buildings.  As morbid as it is beautiful, I even found a freshly dug grave under one of the benches in Vanier Park.  Vancouver is like a world’s collide kind of place — nature meets big city.  I prefer the nature parts more. Today I headed to the Capilano Suspension Bridge Park.  What a neat place!  It was basically a forest with pathways and bridges built into it.  The suspension bridge going across the treetops was wobbly, of course, more so when idiots would purposely rock it.  I was impressed with both my balance and sense of calm (considering the fear I told you about me trying to overcome).  I also felt a greater appreciation for trees than I already do have.  I am a self-proclaimed treehugger, partly because of the movie Ferngully.  I loved that movie as a child, and still now.  Ferngully taught me trees feel pain, and it killed me when I saw two girls (probably in their early 20s), carving something into a tree!  Capilano is like a tree sanctuary!  What is wrong with people?  I gave them a firm, angry stare down.  I saw a look of guilt flash across their face, but I’m sure that guilt was fleeting.  It just makes me so angry how we all treat our world.  I am no saint myself, and I yearn for more knowledge on how I could be greener.  I think I could learn a lot from places like Vancouver, Portland, and even Seattle. The suspension bridge is 230 feet above the Capilano River. 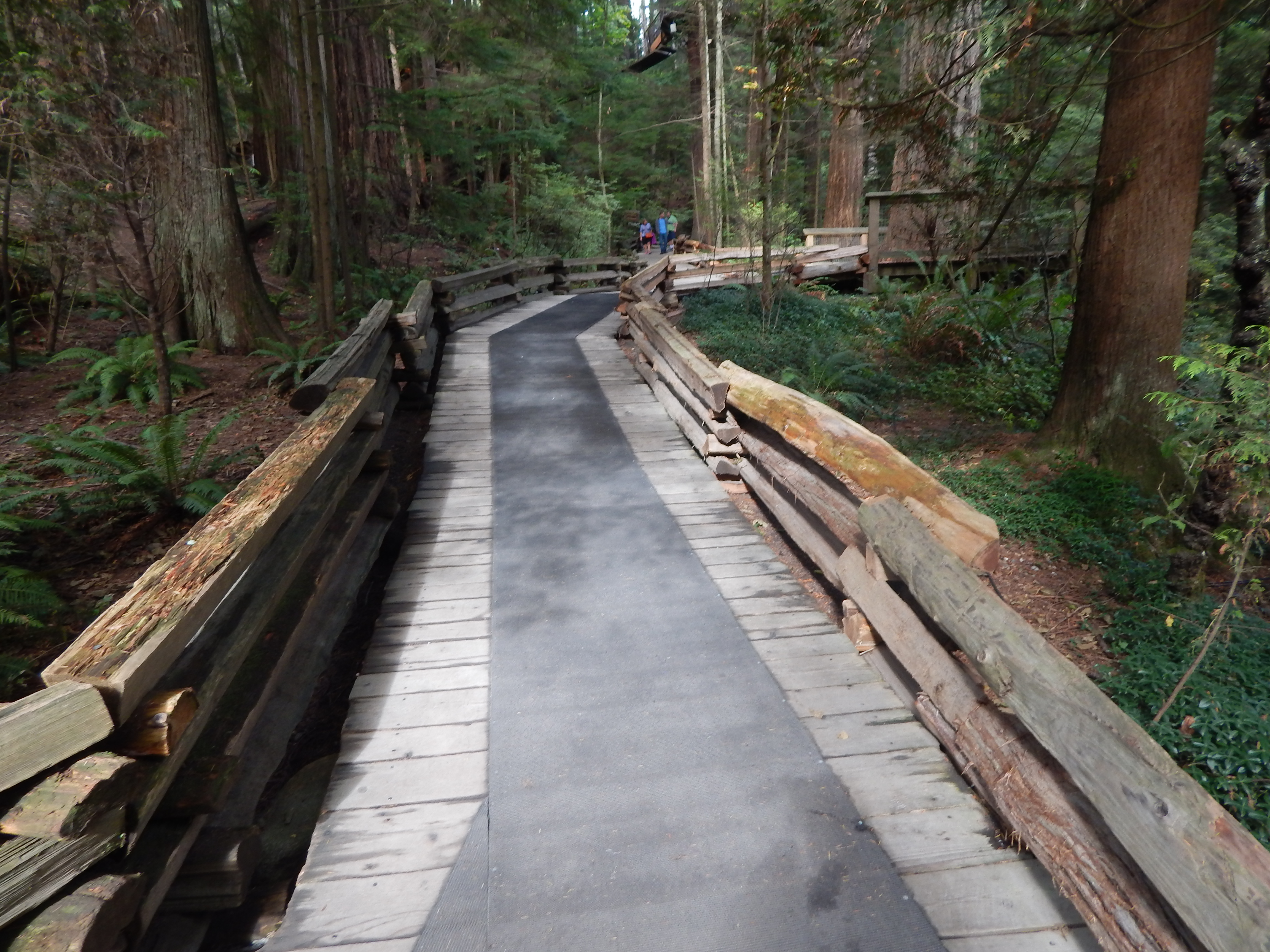 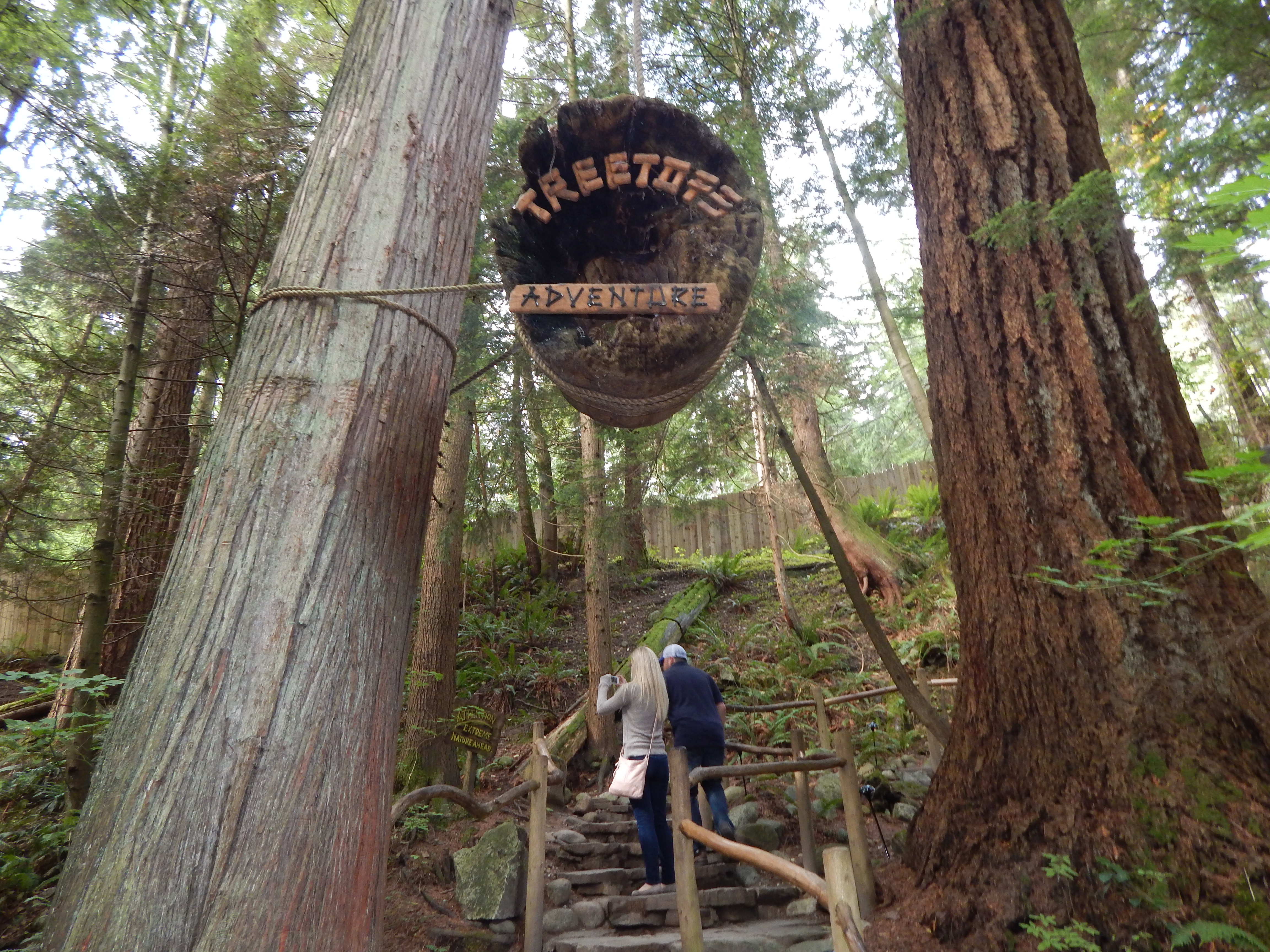 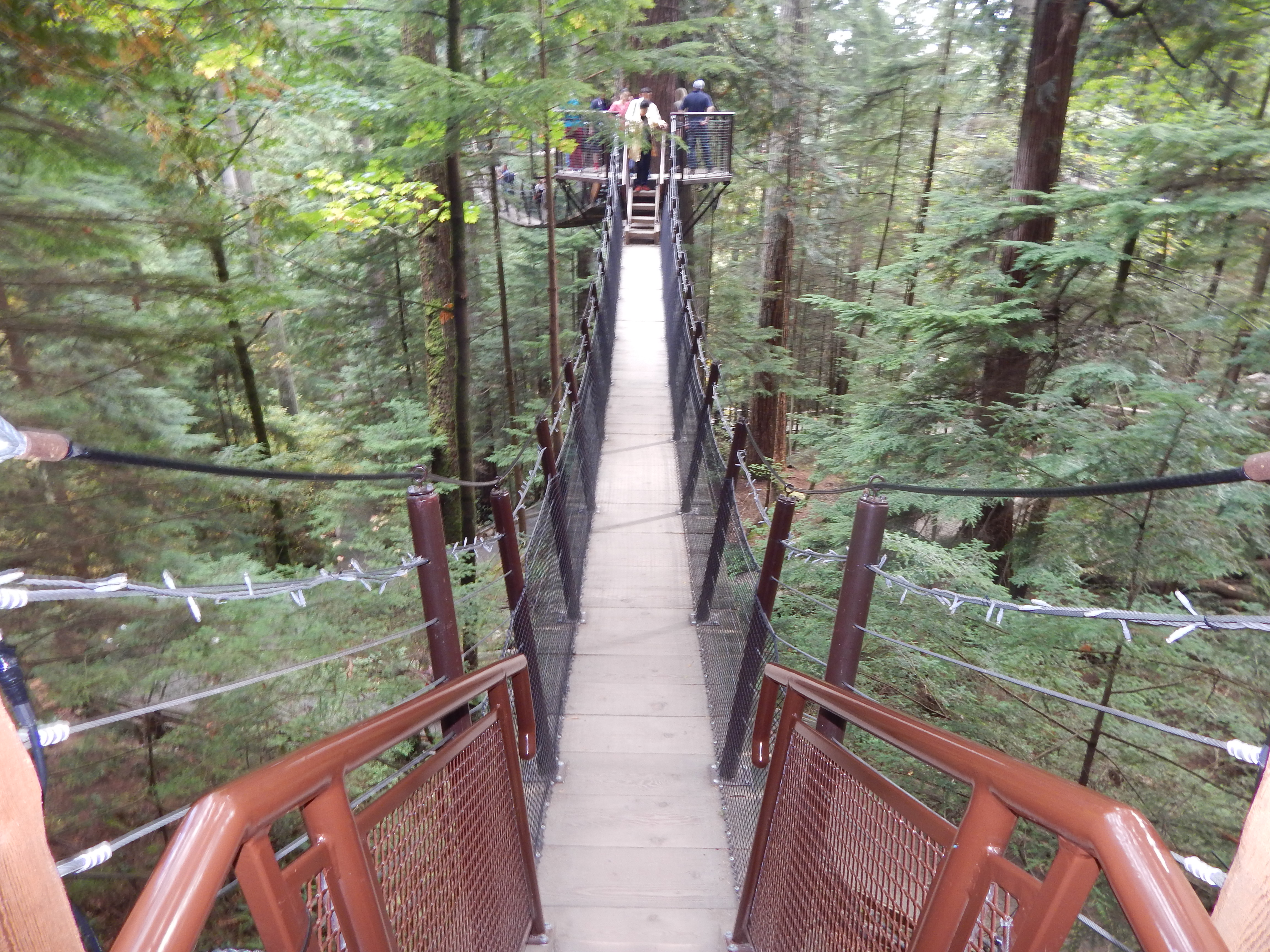 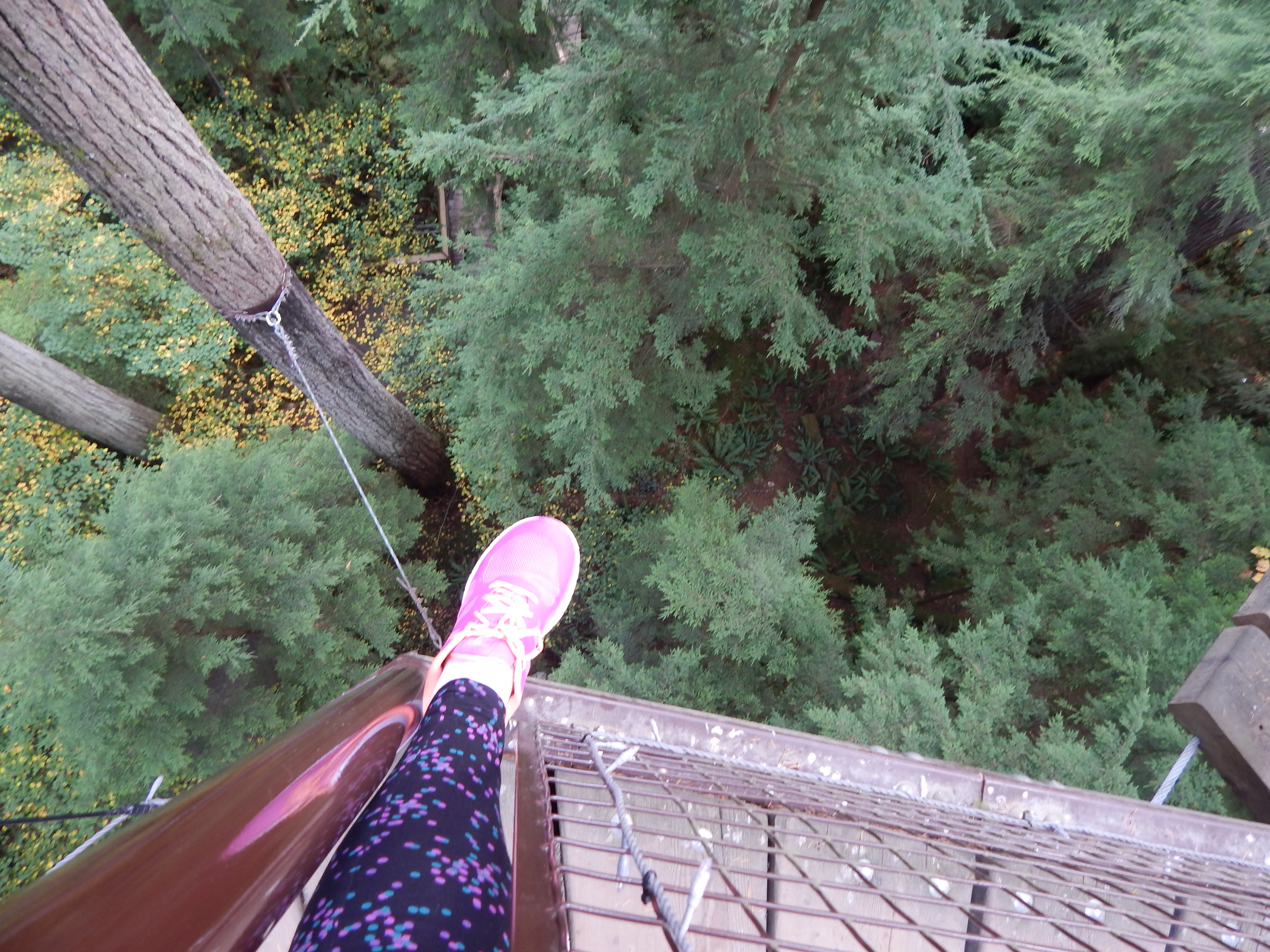 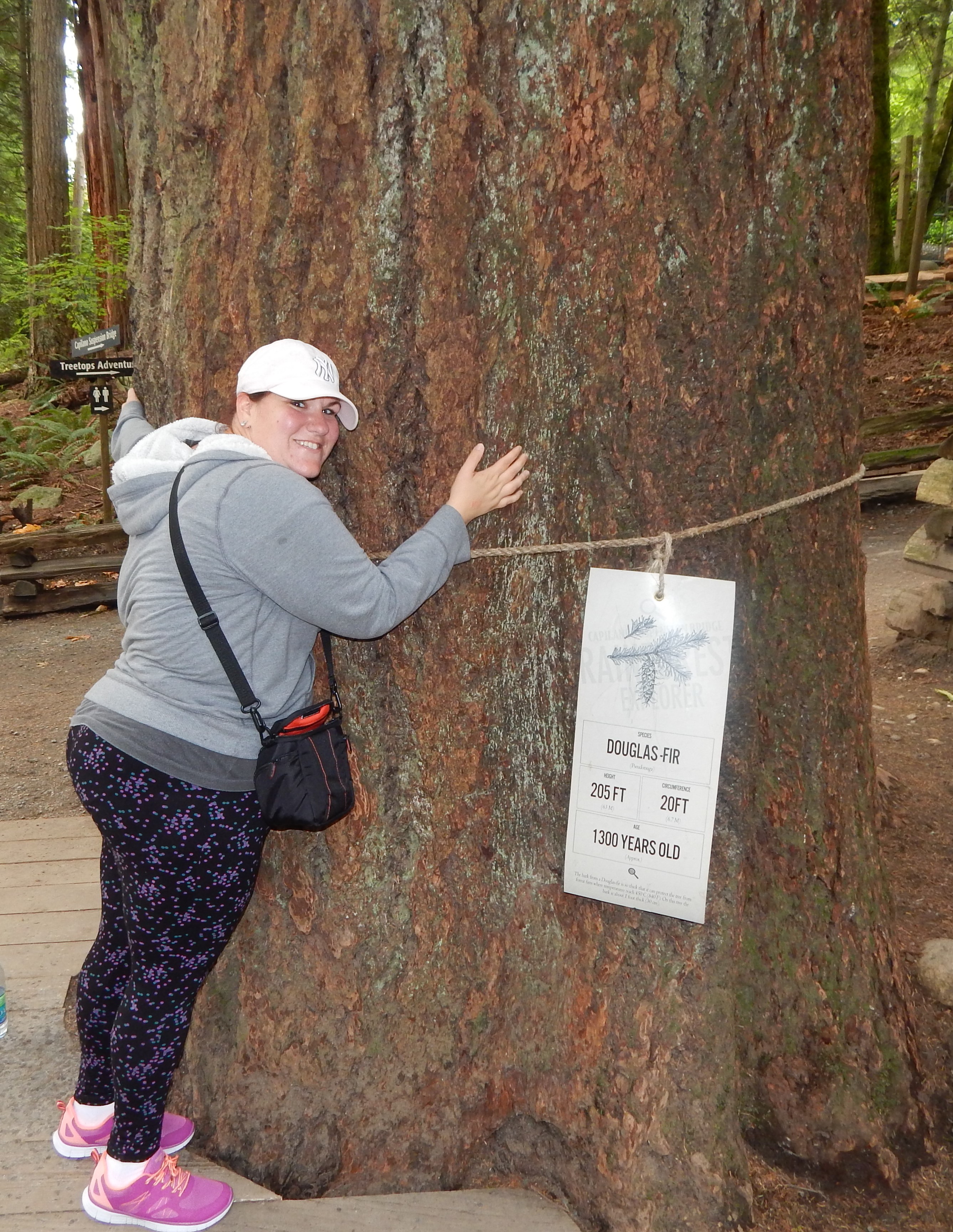 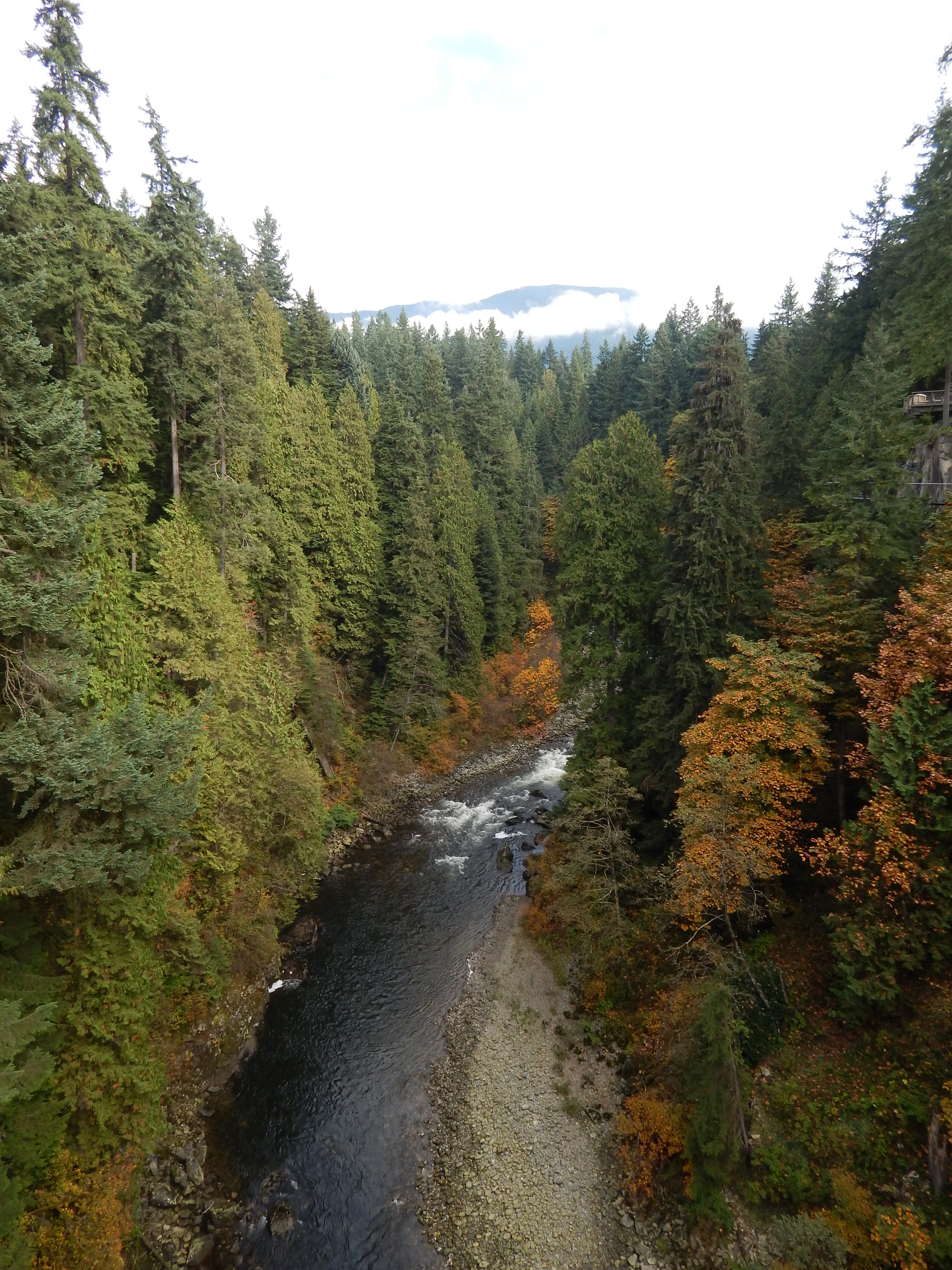 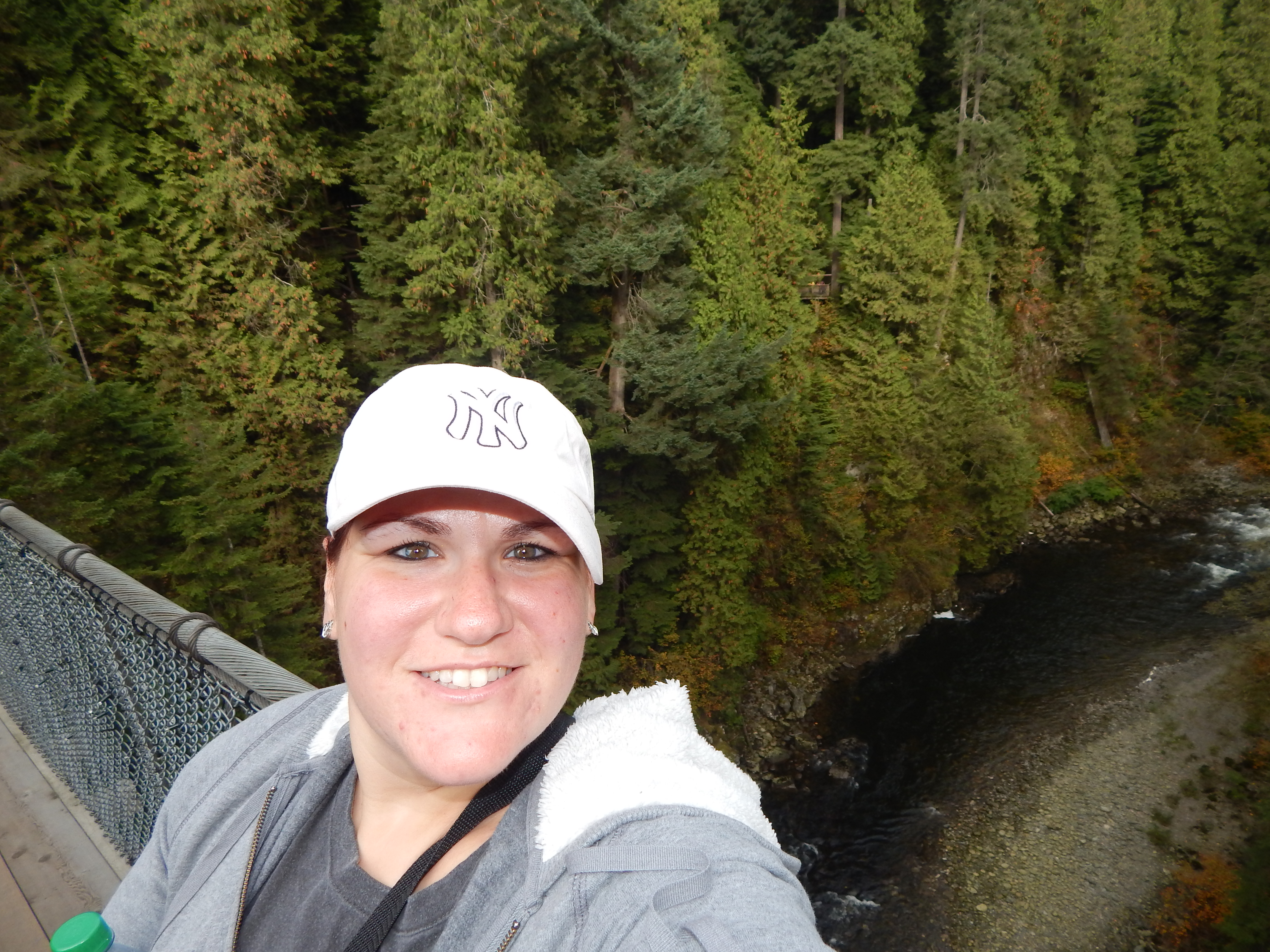 Me overcoming my fear of heights on the suspension bridge.

After the bridge park, I took the bus to Stanley Park. Wow, it’s incredibly beautiful! I walked around for a while, just taking my time, and stopping to take photos of trees, the beach, people and dogs. It was very soothing to just drift and bask in simple, beautiful things
I don’t particularly like the more urban, cityscape parts of Vancouver.  There is nothing fascinating to me about seeing big buildings, department stores, and fast food chains.  I rather go to New York for that sort of thing.  I did try a coffee chain in Vancouver called Blenz.  I figured it had to be good since there were so many locations.  Wrong! I’ve never had such bitter, God-awful espresso before in my life.  The service was really lackluster as well, and the give out individual wi-fi passwords on slips of paper that expire in two hours.  What a waste of paper! Ugh.
I ate at The Foundation one last time and their day time vibe was much more mellow.  I couldn’t decide what to get, so I chose this sampler platter for $12.  It could have fed four people!  It was huge.  I took the rest back to James’ place and gave it to him.  We stayed up chatting until about 2am and he set up a taxi to pick me up in the morning.
I’m glad I made a friend in Vancouver and experienced such so many beautiful landscapes.  Next stop, Portland! 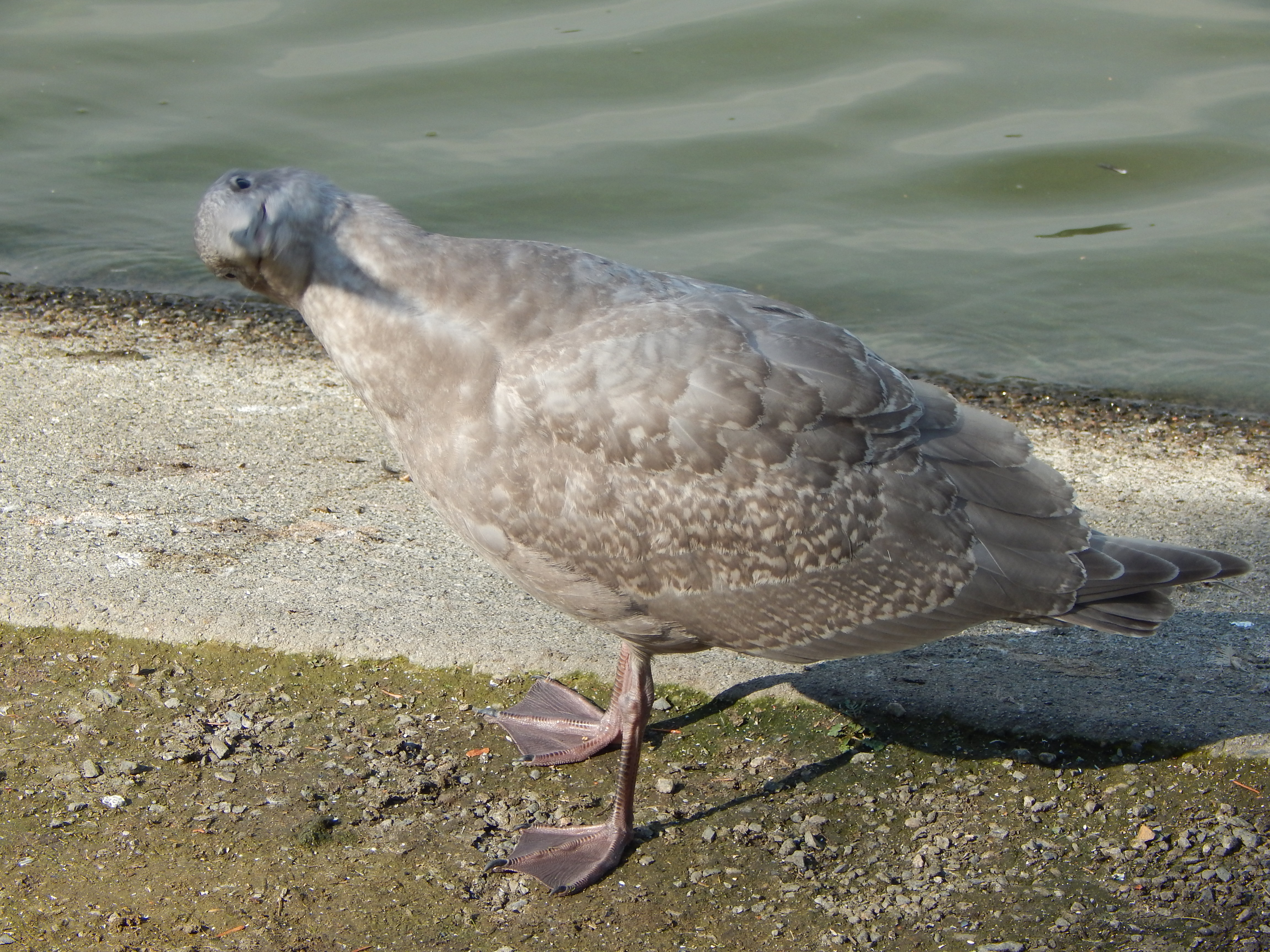 Some sort of duck that looks like a seagull at Stanley Park. 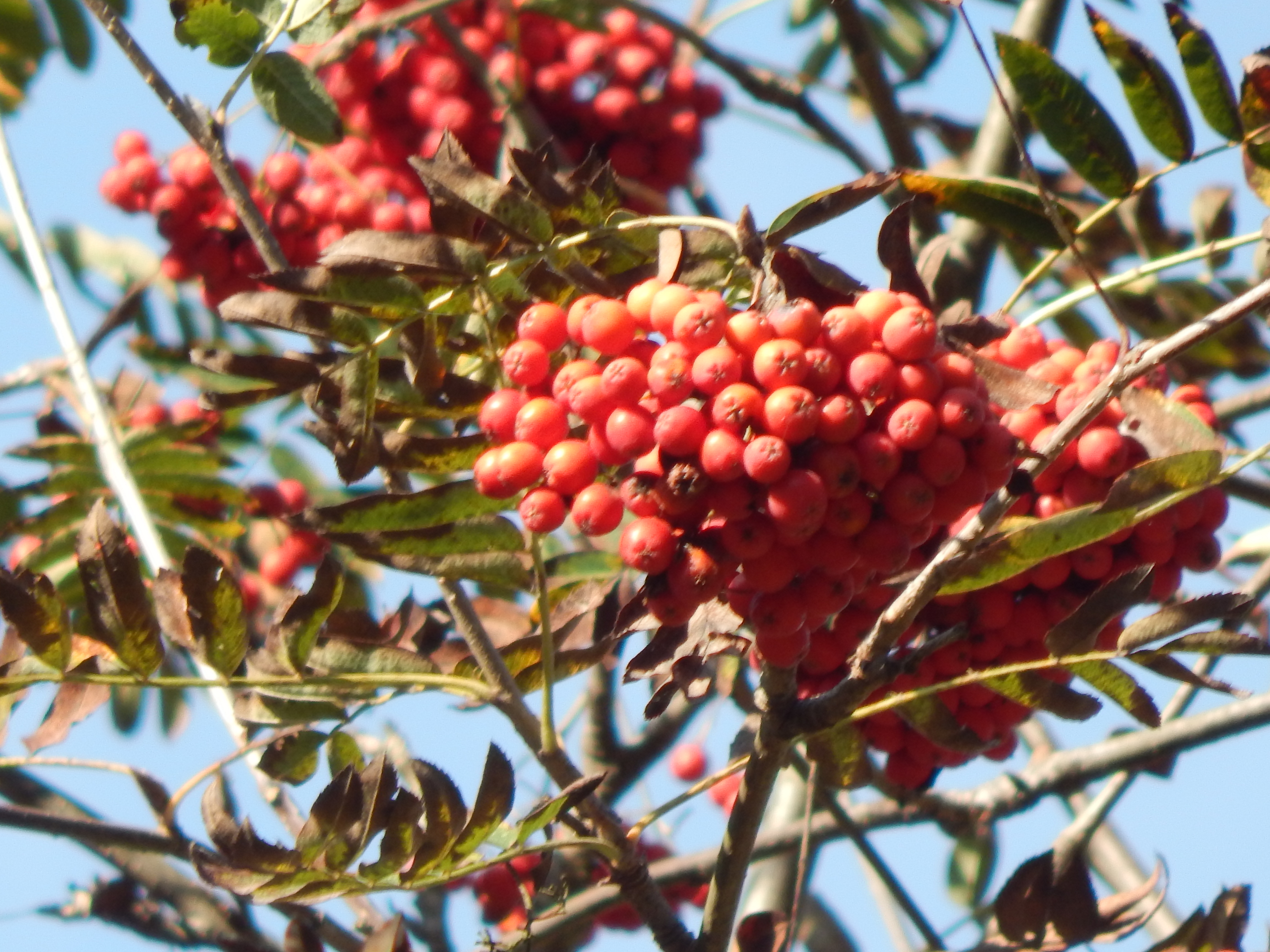 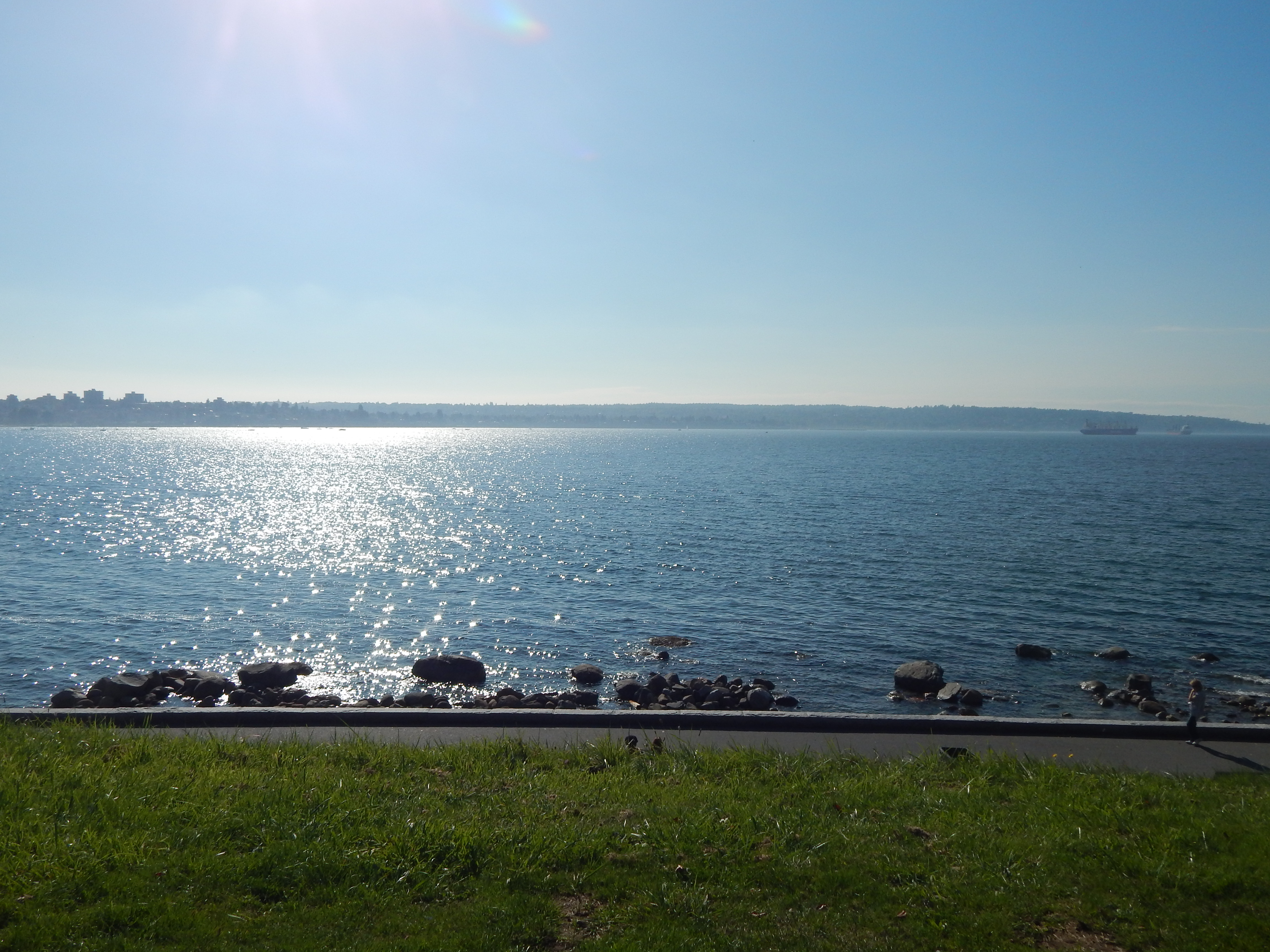 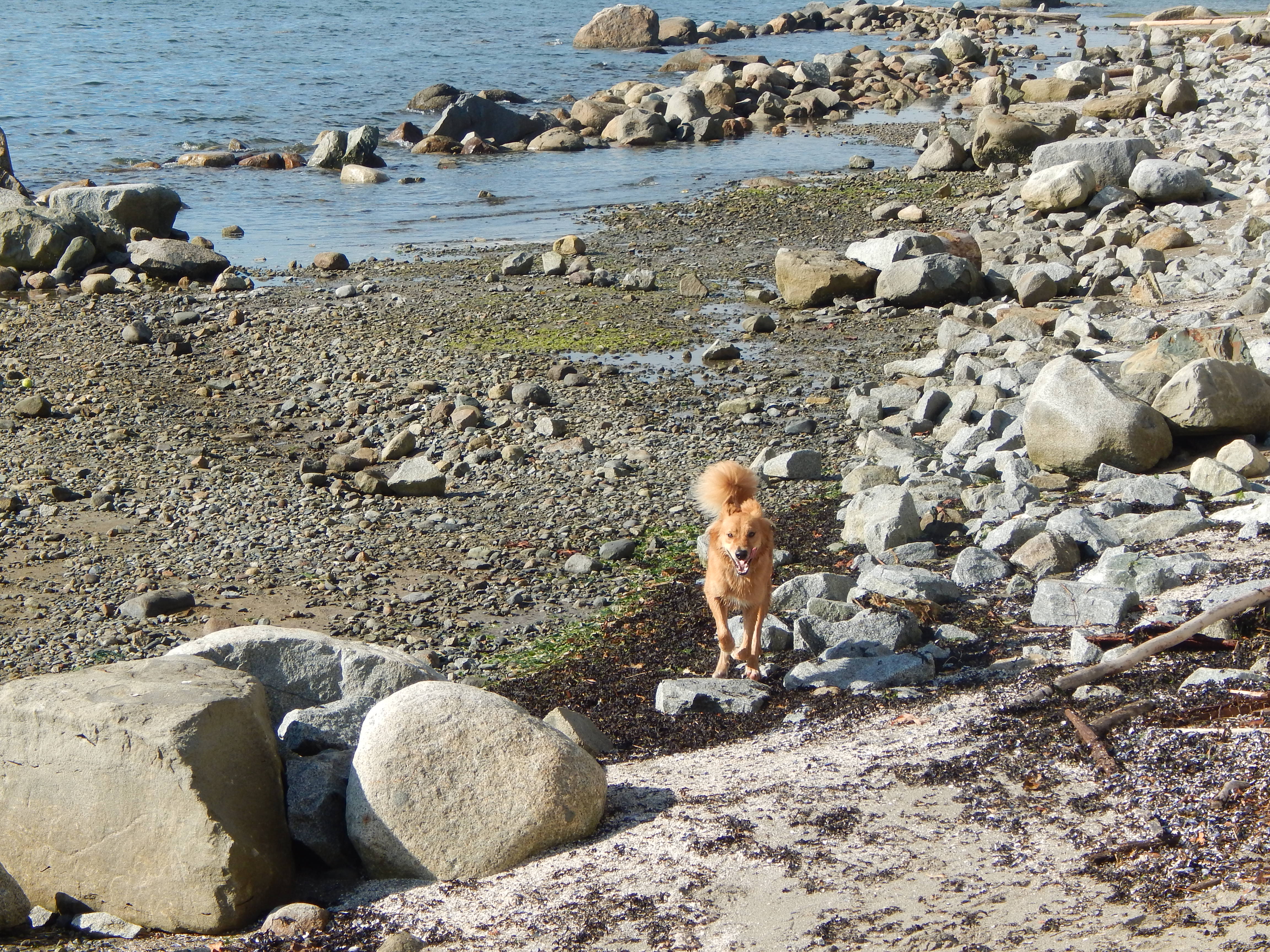 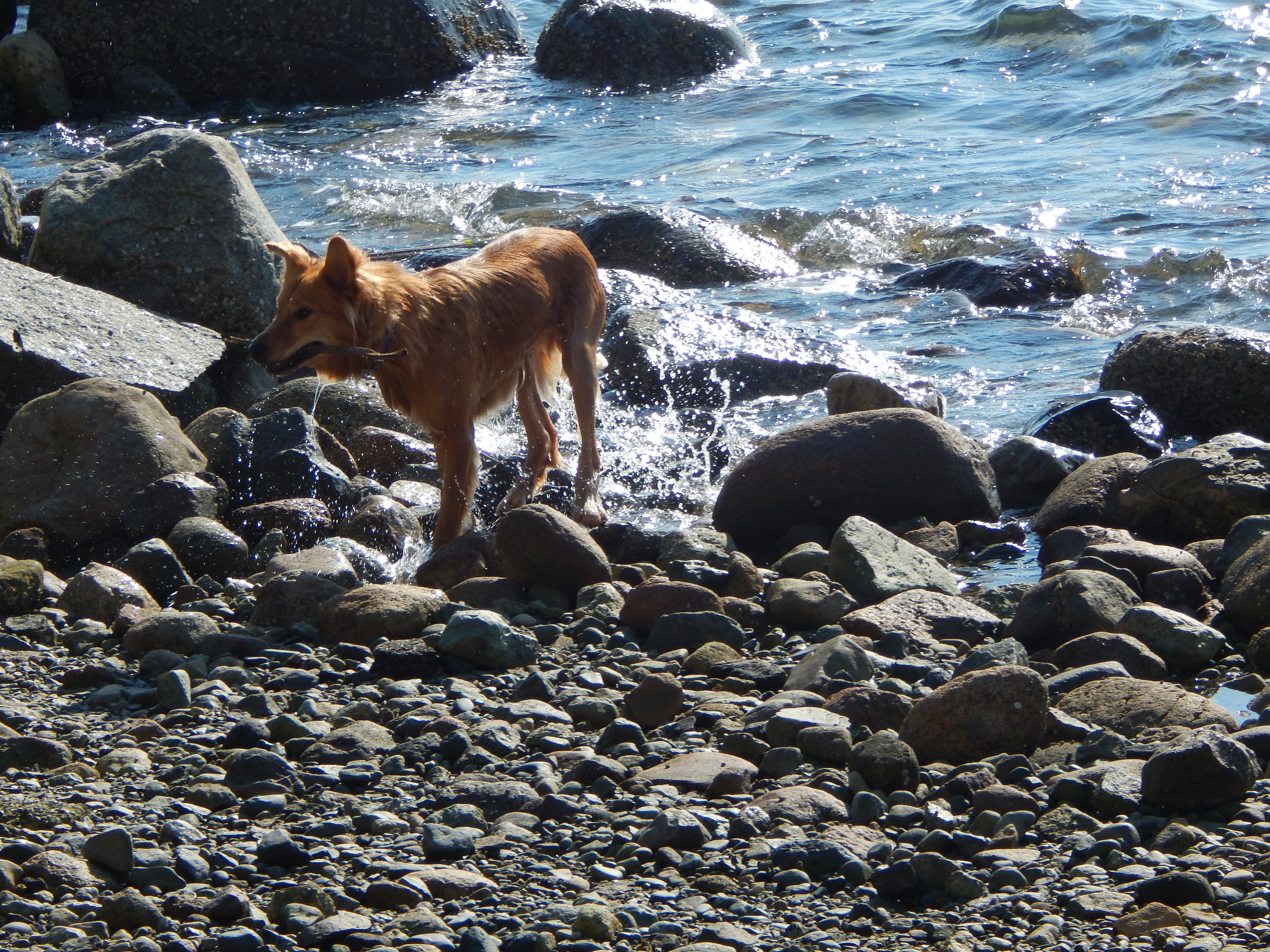 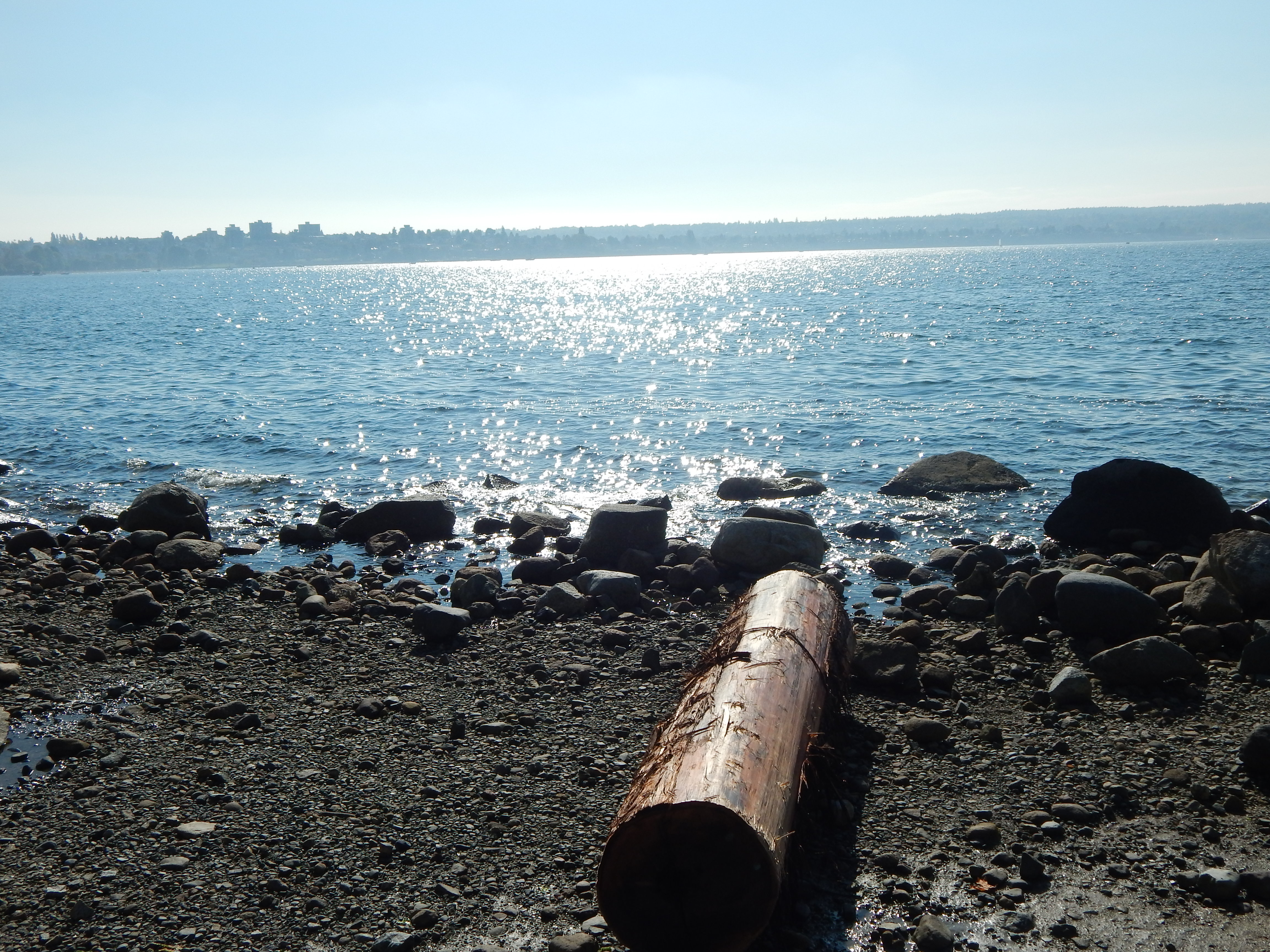 4 Comments on “Travel Blog: Vancouver Brought Me Closer To Nature”