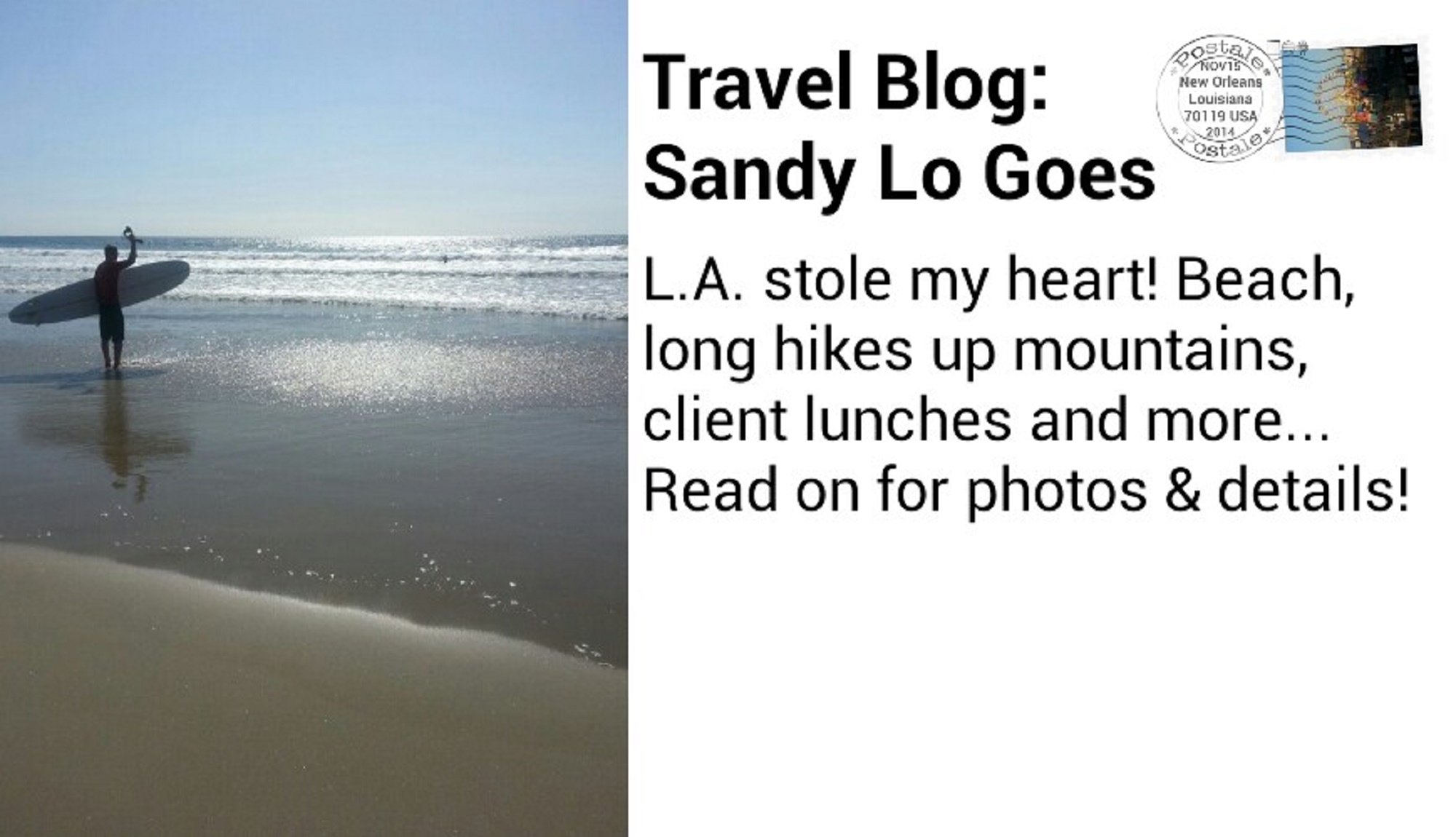 Los Angeles was on my list of places to visit my entire life. In fact, as a kid I dreamt of moving to Hollywood and breaking into the movie industry in some form. I’ve always considered myself a movie buff, especially in love with John Travolta. Now, I still dream of breaking into movies. I would love to turn my novels into films. Funny enough, Monika, my AirBnB host is an indie film director. I met her briefly my first night in town. I didn’t get into L.A. until after 9pm, and I found myself enthralled from the Greyhound seeing landmarks like the Capitol Records building. Zoomed in shot of the Hollywood sign from the Griffith Observatory.

I wondered how I was going to feel about L.A. So many people say it’s a dump, but I always thought I would like it. What surprised me was how much I considered moving here during my visit! Not only did it feel like it would be a smart business move, but L.A. offers all the natural (and unnatural) elements! Beach, mountains, cityscapes, great weather, and lots of interesting people. Overall, I decided moving to L.A. might not be wise considering it did hold a lot of the same elements I wanted to escape from in New York. Grime, crime, crowds, and tons of tourists. I figured the transportation system, high cost of living, hustle and bustle and claustrophobia would eventually get to me.  But if I got offered the right opportunity, I would definitely be open to it. John Travolta’s star on the Walk of Fame!

With that said, I loved L.A. and spent way too much money on food while I was there, even though most of my adventures were free. Food and transportation was really my only expense.  On my first day, I walked to the Walk of Fame, which added up to about 2 hours worth of walking. I didn’t mind though. I perused the stars on the sidewalk, searching for two names: John Travolta and Backstreet Boys. I snapped photos of those that meant something to me, like Adam Sandler, Chris Farley, and Doris Day… oh, and Eric Braedan…who knew the longtime “Young & the Restless” vet had his own star? A homeless man asked me who he was because he never saw anyone take a photo of that star. That’s kind of sad. Victor Newman deserves recognition! Anyway, while searching for Travolta’s star, I saw Grauman’s Chinese Theater. That in itself made me happy. The famous theater is where “Grease”, my favorite movie, premiered in 1978. I had a feeling Travolta’s star wouldn’t be far from there and I was right! I had someone take a photo of me with the star, who obviously didn’t care to let me know that my boobs were way too exposed. Ugh, I’m no prude, but even I think my cleavage is too much in the photos. Oh well. I did find Travolta’s hand and footprints in front of the theater too! I was definitely fan-girling out. I finally found the Backstreet Boys star in front of the Live Nation building. My hands inside John Travolta’s! Will has some big feet! Backstreet Boys star on the Walk of Fame! After my hours spent at the Walk of Fame, I bussed it to The Grove. I didn’t look around and shop much because I wound up sucked into an event at Barnes & Noble. Neil Patrick Harris was doing a book signing that night! First, I tried to get on the press list, but since it was last minute, it was a no go. I bought the book and got my wristband for the event before heading to Starbucks to charge my dead phone. L.A. is weird about charging phones in places! The outlets in Barnes & Noble were all covered up and even some Starbucks and cafes were like that too! So frustrating. After my phone had some juice, I realized I was starving and better eat before the event. I headed to Whole Foods and ate there before going back to Barnes & Noble to stand in line. I chatted away with some other folks in line. I found people in L.A. to be pretty friendly. Everywhere I went, I had conversations or received random compliments on the street. I got called cute twice by two random women. One was the girl who gave me a manicure and one was a random woman at Whole Foods who I smiled at. I love connecting with people, especially when they give me nice compliments, haha! Anyway, the meeting with Neil Patrick Harris was so brief, but he seems sweet. I had him sign my copy to my best friend Natalie, who turned 30 in September. It’s kind of a tradition that I get Natalie random celebrities to wish her a happy birthday, so this seemed like the perfect opportunity, and a great way to show my thanks for her hospitality when I get to New Orleans.
The next day, I had some odds and ends to take care of, like laundry, articles to write, and a vampire show to catch up on. I headed to Beverly Hills without thinking of how much I hate overpriced, designer ridiculousness! I didn’t even bother going inside the stores. I hate window shopping! Instead, I tried out Coffee Bean, one of L.A.’s most popular chains. I was not impressed. Anyway, I charged my phone before deciding to try and walk it all the way to The Viper Room in West Hollywood. Why? Because I’m crazy and I like to challenge my walking abilities. Well, it was getting dark and Sunset breaks up and I got all sorts of turned around. Plus, the Beverly Hills rich kids drive like maniacs! Finally, I got on the bus. I found out one of my Facebook friends, Stacy was already at The Viper Room seeing one of her friend’s bands. Stacy is also in the music industry and we’ve known each other virtually for years through that.
I got to the infamous Viper Room, which was on my hit list of places to go. It used to be owned by Johnny Depp and is most known for River Phoenix overdosing right outside, sadly. I met up with Stacy and the band, The Halos were awesome. Stacy introduced me to them afterwards and we chatted for a bit before she offered to drive me back to the AirBnB, even giving me a mini tour on our way. What started out as a so-so day, turned out to be a fun night! Looking out on L.A. after my hike up to the Griffith Observatory.

Highlights of the rest of my stay in L.A. included a beach day to Venice, where I had a phenomenal lunch at Seed, and Santa Monica, where I rode the roller coaster on the pier just to say I did. Another day, I went to Los Feliz for vegan pizza before hiking to the Griffith Observatory in the Hollywood Hills. On my way there I passed the Greek Theater where Hall & Oates were doing soundcheck! So I got to hear some good tunes on my hike before my ears were just filled with the almost silence and peace of the beautiful views. Most people drove up to the Observatory, but I was proud I hiked all the way up.
Once I got to the top, I decided I’d be silly not to stay for sunset. I climbed up on the ledge, something I would have never done a year ago, and watched the sun go down over L.A. It was wonderful. Hiking back down, however, was not so great. It was pitch black! I couldn’t find the hiking path, that’s how dark it was! There were no real lights guiding the way, so I followed other people walking… Turns out they were heading to their cars!  Soon, I was ALL alone…in the dark! Occasionally a car would swerve around the curvy road, but it was just me, in the woods, on a giant mountain basically. I worried a lion would come out at me and we’d scare each other. I had just heard on the news about a lion crossing the freeway from the hills and getting killed. Alas, I made it down the hill without running into any large cats or crazy woodsmen, thankfully. Instead, by the time I walked all the way back to the AirBnB, I felt pride in myself yet again for hiking both ways. Next time, I would think about avoiding the dark though. A group of friends taking a selfie turned into a good photo op for me. I love my camera! It captures the moon, making me feel like my character Haley from “Dream Catchers”. “Bright lights, big city, she dreams of love.” – City of Angels lyric by 30 Seconds To Mars The rest of my trip consisted of a lunch date with some of my clients at a Hollywood hotspot, Grasias Madre, a vegan restaurant. While I was there, the actress Jami Gertz was also, which was cool. I also met up with some other entertainment industry acquaintances, and got to actually go inside the Capitol Records building for some hang out time with one of them! I was very sad to leave L.A. and am making a point to go visit semi-often. Definitely was my favorite city so far!