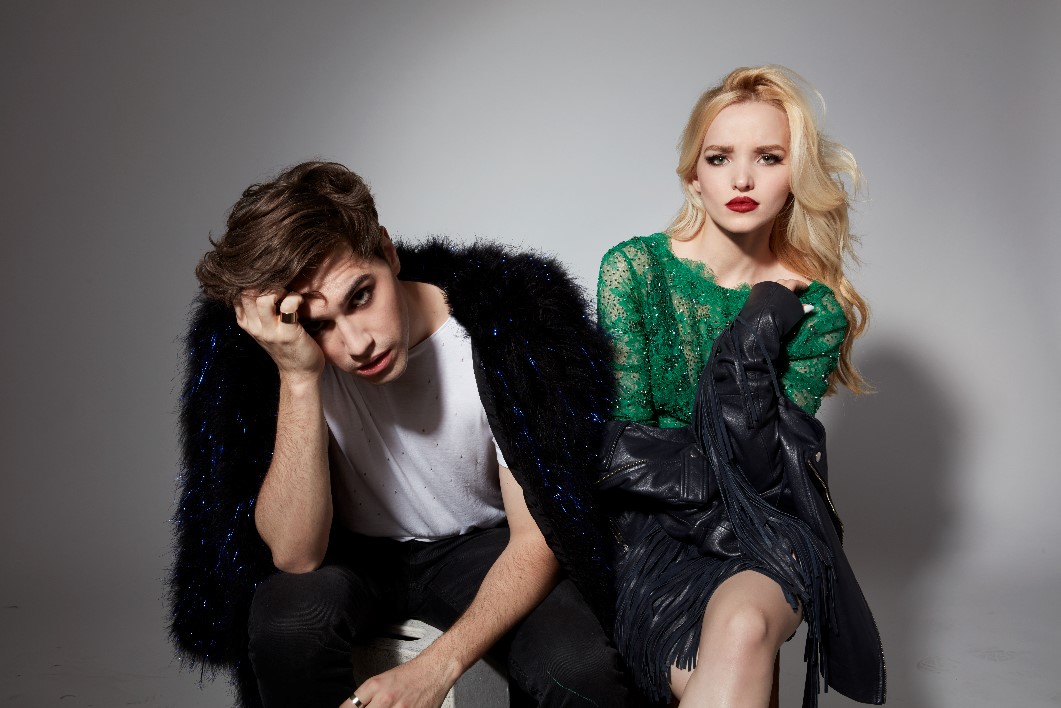 Although The Girl and the Dreamcatcher sounds like the name of my next novel, it’s actually a musical duo consisting of Dove Cameron (Disney’s Descendants, Liv and Maddie) and fiance Ryan McCartan (Liv and Maddie, Rocky Horror Picture Show).  And yes, their personal story also sounds like the plot of a romance series: girl meets boy, they dislike each other, but are forced to work together and eventually fall in love, making sweet music together.  However, for Dove and Ryan — this isn’t a role they’ve been cast in, it’s their reality! Last week, TGATDC dropped their first EP, Negatives, with their musical and personal chemistry apparent in every song.  Already receiving high-praise from the media, Negatives is heating up the iTunes charts quickly and their music video for “Make You Stay” went to #3 on VEVO’s Top New Music list.
Negatives consists of 6 infectious pop hits, but not your typical bubblegum or hot club songs we’ve come to expect from Disney stars of the past.  While danceable and upbeat, Dove and Ryan’s music surpasses cliches with electro-pop beats and incorporating themes like,wolves, the moon and stars — tieing in the dreamcatcher name.
“You know how I get when the sun goes down,” sings Ryan on “Glowing In The Dark” while other tracks “Cry Wolf” and the powerful “Monster” could be songs on the soundtrack for “Twilight”, but are beautifully done and relatable.
It’s incredibly hard not to fall in love with Dove and Ryan’s voices and how well they complement one another.  Seriously.  Listen and repeat this EP!
I sent the engaged couple some questions earlier this week and am happy to share their answers with you!
Sandy Lo: First, I LOVE the name of your duo. How did you come up with it?

Dove Cameron & Ryan McCartan (The Girl and the Dreamcatcher): Thank you so much! It was a big team effort to find a name that fit us as well as this one does…we are both such imagery based artists, we wanted to find something evocative and painted a mood for the listeners! Plus, we both had recurring themes of dreamcatchers in our lives.
SL: Congratulations on your EP, Negatives. What was the journey to release it like?
TGATDC: Again, thank you! We couldn’t be more thrilled. Negatives was a 2 year journey filled with long writing intensives, lots of ground work and long days, but ultimately some of the most fun we’ve had in our lives! Having it be out in the world for other people to feel what they feel about it is surreal, and something that we could never have prepared for.
SL: What sounds and themes were your main influence making Negatives?
TGATDC: Negatives is filled with lots of air, but also walls of sounds, ultimately resulting in a building of tension for the listener that we both really respond to. We wanted to write about real life circumstances that may not be as pretty or as “pop relevant” but that everyone could feel in their core as a place that they’ve been. Music should make one understand oneself better. And that’s what we had hoped to do.
SL: Does being a couple make it more challenging to work together?
TGATDC: Being a couple makes it easier and definitely harder to work together. Easier, because you get to spend so much time with one another, you never have to miss the other, and there is no lack of communication. Harder, because you’re spending almost 100% of your time with one person! There is bound to be some friction. And sometimes, work can bleed into home, which can make you feel like there is no escape from work.
SL: Describe your first impression of each other and how that might have changed over time.
TGATDC: We did not like each other at first. One of those “attraction being mistaken for annoyance or upset” kind of situations. If you know anything about our story, that obviously changed very quickly.
SL: Dove, can you give us any teasers about “Descendants 2”?
Dove Cameron: I can’t tell you much about D2, but I can tell you it is very different from round one! Lots of different locations and images in this one…and lots more drama.
SL: Ryan, any more acting projects you can talk about coming up?
Ryan McCartan: “The Rocky Horror Picture Show” comes out October 20th, and I have an indie drama called “The Standoff” coming out in September. Check ’em out!
SL: Can we catch you on tour in the near future?
TGATDC: We hope to tour in the future! Keep an eye on our socials…
SL: What song on the EP was the most personal one for you?
TGATDC: Honestly, they were all personal to us. They wouldn’t have made the EP if they weren’t! As artists, probably “Gladiator”, because it took the most time and effort, and we fought the most for it. As people, probably “My Way”, or “Cry Wolf”. Lots of personal stuff in there.
SL: What’s next for you guys personally and professionally?
TGATDC: Now that “Liv and Maddie” has ended, we’re playing a game of catch up, in a huge way, both professionally and personally. It’s definitely a time of transition, learning, building and growing! It’s like graduating high school or college. Just a whole lot of a lot. Lot’s to do with furthering the band while Dove is away at “Descendants 2” and Ryan does press for “The Rocky Horror Picture Show”. The life of two actor/musician performers who are also engaged is a bit of a “play it by ear” life!
SL: Is there anything you want to say to all of your fans out there?
TGATDC: To our DreamCatchers: We love you more than we have words to say! Thank you for skyrocketing Negatives to #2 on the iTunes pop charts, and for your never ending support of everything that we do! We hope that we are making you all as proud as you make us every day! Keep catching dreams.