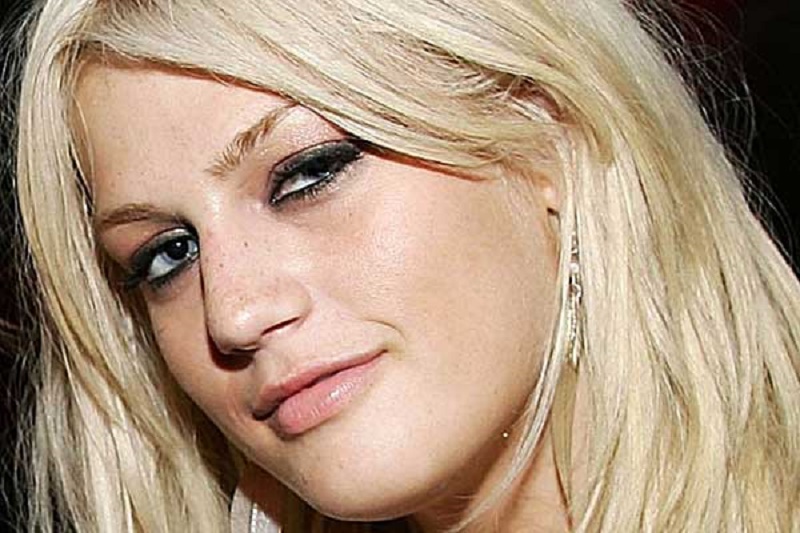 It’s been about five years since some of us heard from Radio Disney friendly Leslie Carter. But for many of you, this might be the first time hearing that name. You’re probably asking yourselves if she’s related to the same blood line that brought you Nick and Aaron… well, yes, she’s their sister. But don’t quickly make up your mind whether you like or don’t like her merely because she’s a Carter. Like Aaron, Leslie has to work hard to get out of the shadow of her older brother. But what’s even harder is she has to not only worry about her older brother’s Backstreet career, but her younger bro Aaron’s as well.

Leslie’s first time around the musical block was back in 2001 with her mother, Jane and the DreamWorks label backing her. Her onstage experience consisted mainly of opening for Aaron Carter on his summer tour, talk about being directly caste in the shadow. Though her debut single, “Like Wow” made it on the “Shrek” soundtrack and received some airplay on Disney, Leslie was soon dropped from the label and disappeared from the scene.

So where has she been? Well, if you know anything about the Carter family, you know they’ve had their fair share of rough patches. Leslie says she was trying to get her life together and basically sorting through a lot of “crap”. The now 19-year-old Leslie is trying to re-establish herself in the industry. Not only has she matured, but her style has evolved. No longer the teeny bopper cutesy pop singer, Leslie is now a punk-rocker with some pop undertones.

“This time I’ve written the songs that I’m going to play.” Leslie told StarShine in one of her first interviews about her re-invented music career. “I’ve worked with a few different writers and actually got the chance to write from my own journal.” Leslie seems truly proud to sing her self-penned material. Besides writing the songs, Leslie also had to make a difficult decision where it concerns family and business.

Leaving behind her mother as her manager, she signed on with Donna Wright (Backstreet Boys, ‘N Sync, Pink). “When it came down to it, it’s a bunch of personal reasons.” Leslie explains why she made that decision. “You just don’t mix the two, like I’ve tried to stay with my mom. She’s a great person, I still love her to death, but if you stay there… you seem to be in the same kind of cycle, doing the same things and you’re not going anywhere. You’ve got to come to a point where you make a choice and I had to do something for myself, and that’s what I did.”

Leslie is somewhat estranged from the rest of her family as well, but hopes to make progress in her relationships with them. “I’m not talking to them the way I would like. It’s not really like family talk. It’s more like ‘hey, how are you doing?’ and things like that.” Leslie explains, but also says that Nick has been more receptive to her than her other siblings. “He’ll sit there and listen to me and we’ll talk for a while.”

With the family drama behind her, Leslie is in good spirits especially when we met up with her before her showcase in New York City. Arriving fashionably late, Leslie and I tried to find a quiet spot for our interview. This was no easy task as we had to move into another room and were interrupted several times. “I’m proud of you for putting up with this interview.” Leslie laughed. “I’m having a good time even though we’ve been interrupted…” She says as she waves someone off about to interrupt and she makes a face behind their back.

Dressed in jeans with a butterfly on them, a baby tee, jacket and Madonna-esque lace gloves, I had to ask about Leslie’s style. “Before I didn’t really pick my own clothes. Now I kind of have a sense of style and what I like and what I look for. What I’m wearing now represents my music a lot. I definitely look for that when I’m buying clothes.” Leslie explains.

Not only has her fashion sense changed, but so has her stage show. Leslie performed several songs that night for fans and industry alike along with her band. It seemed to take some by surprise when a girl went up on stage to lead the band that was rocking out, but Leslie fell right along into the role. It came as a bit of a surprise at how natural her stage presence was, considering she hasn’t had the much experience on one. But then again, considering Leslie’s musical background, it shouldn’t be a surprise at all.

Leslie’s voice is a mixture of emotion, sugar and edge. Songs like “Worse” and “Breakout” are fun, energetic, and pure punk that you just want to blast the stereo to and sing along with. “I Will Go” and “Fallin” are a little more mellow, but bring out Leslie’s vocals more. So which song is Leslie’s favorite? “I find myself singing some random ones. I don’t think I have a favorite as of now. I’m not a favorites kind of person.” She admits. “I know it’s going to be on some website, this is her favorite song…” Leslie jokes.

Speaking of websites posting things that aren’t true, I asked Leslie about an old time rumor about her wanting to be a teacher. She had to laugh. “I never said that. I was never into school. I couldn’t do it. I’m just so all over the place all of the time. I’d sit there and draw and I couldn’t stay focused.” Leslie and I continued to discuss how you can’t believe everything you read. “I’ve gone online and done my snooping when Aaron was web searching.” She admits. We then joked about how you can find out things you didn’t know about yourself. “I didn’t know that was my favorite color, I didn’t know I said that, really? That’s my favorite food?”

So now that Leslie is getting everything in order with her career, what’s next? “My goal is just to get a good deal on my own and just feel like I’m accomplishing something. I want to be working for the next two years because if I’m sitting around not doing anything, I go crazy.” Leslie explains.

Leslie sent me back with a message to her fans and future fans. ”Thank you for the support throughout the years, since the beginning. Thanks for always believing I would come back and helping me get through my days because seeing things online… I do go out and do that because it inspires me to do better. And for new fans to come… just always be open to new things and all music is beautiful in its own way, it just depends on what you like.”