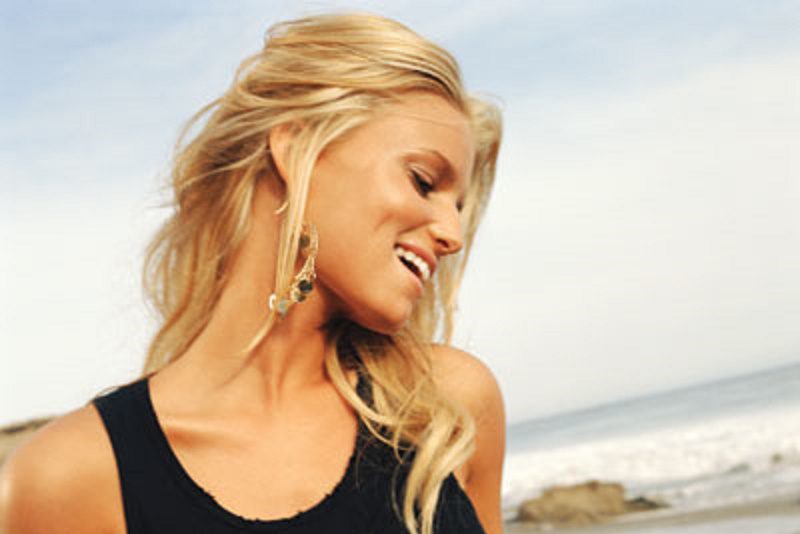 Jessica Simpson has been anticipating August 19th for some time now. Not only did her third studio album, In This Skin hit record stores, but the premiere of her MTV series, “Newlyweds: Nick & Jessica” debuted that same night.

The day was filled with press, meet & greets, TV appearances followed by a screening with her husband, Nick Lachey at Planet Hollywood. After Jessica and Nick appeared on the infamous TRL, she headed over to the Virgin Mega Store, which is also located in Times Square to meet tons and tons of fans who have been waiting outside since before 9am that morning.

Jessica smiled, posed, did interview upon interview and signed so many autographs her hand hurt by the end of it all. Despite her aching hand, she took time out before heading over to Planet Hollywood to speak with StarShine. Dressed in a classy, yet trendy black two piece outfit and three inch heels, Jessica’s perfectly white teeth beamed as she smiled when asked about how the signing went. “I didn’t expect there to be so many people.” Jessica admits a little shocked still. “So I had a ton of fun. I have great fans in New York.” She nods.

Jessica is mostly known for her powerhouse voice with hits like “I Wanna Love You Forever”, “Where You Are”, “I Think I’m In Love” and the infectious dance track “Irresistible”. How does In This Skin fit into the mix compared to her other albums? “It’s more like my first record than my second record.” Jessica compares. “It’s just more me. I got to control most of it and write the material for the first time. I think just after listening to it you definitely get to know me as a person.” She says proudly.

It seems allowing the public to get to know her is important to Jessica. If the album with intimate topics like the ones in the first single “Sweetest Sin” and other personal songs like “Forbidden Fruit” and the title track, “In This Skin” weren’t enough, Jessica along with Nick are opening their home to all of America.

“Newlyweds: Nick & Jessica” sheds a new light on the couple. That light reflects a not so perfect life with tons of arguments and reveals a lot about the couple’s personalities. The first episode alone shows a conflict in Nick and Jessica’s living style. Nick likes things neat while Jessica…well, she put it best when she called herself a “frat boy” on TRL.

Jessica says she and Nick grew accustomed to the cameras following them around, but the first two weeks were hard to adjust. She also admits she was a little self-conscious at how she looked for the cameras at first. “I would always wear make-up and the whole thing. Get all dooted up, but no, not anymore.”

With cameras around to scrutinize your every move, there has to be some things you hope they don’t catch. “You’ll probably see an embarrassing moment every episode.” Jessica assures us. “Embarrassing moments that I don’t even know about and I find out about when I watch the episode.” She laughs.

Jessica also filled us in on how she feels that marriage has made her a better person. She beamed when talking about the amount of love for Nick. “I did never think as I was walking down the aisle that I could possibly love my husband more, but as you adjust and live together somehow you take it to the next level…somehow!” Jessica grins.

Critics will most likely pick apart Nick and Jessica’s relationship more than her album, which does in fact reflect growth and has many personal touches. Jessica herself couldn’t even pick a song that was more personal than the rest. “They’re all about the love for my husband. There’s one about my love for my father. They’re all very personal.” Jessica explains.

The theme is obviously many levels of love. The first single, “Sweetest Sin” shows Jessica’s fans the intimate side as well as part of her sexuality. The video poses Jessica along with Nick kissing in the water and lying in bed together on the beach. It gets pretty hot. If fighting and pouting is what’s seen between the two on “Newlyweds”, the chemistry is definitely shared within the video.

Jessica revealed that her next single would be “With You”. The track is a catchy, fun yet sweet song with lyrics like “The real me is a southern girl with her Levi’s on and an open heart”. Her vocals on the track aren’t as diva-like as we’re used to, but that’s what makes it great. Fans are used to the typical Jessica Simpson sound. Jessica’s voice was always recognized instantly, but toning down her voice on some tracks was a brilliant way to give her a slightly new style.

Not that the album lacks strong vocals by any means. Each track incorporates Jessica’s amazing vocal ability. “I Have Loved You” brings back an almost classic beauty to music. The notes are hit perfectly and melodically and the lyrics are endearing.

Dance tracks “Forbidden Fruit” and “Loving You” break up the sappy love vibe, though even the ballads aren’t overdone. However, “Everyday See You” and “Underneath” musically aren’t really interesting to listen to, the lyrics are still beautiful nonetheless.

“In This Skin” is a well done song about being comfortable with yourself and loving who you are. It’s a feel good song for any girl, especially one who’s still trying to find herself to listen to and sing along with.

All and all, Jessica’s new music is a growth for her and allowed her to write her own material, which In This Skin was her first chance at doing that, so she deserves credit. She confirms love is the theme, but to some people, eleven songs of love, whether it be about sex or romance or letting go of a love can become a little redundant. It all depends on the kind of person you are.

However, Jessica fans are sure to love it. They love her and Jessica obviously feels the same way about them. She even gave us some insight on opening her life as well as her heart to her supporters. “I love my fans. This record is for them. I really wanted to share my life with them. The TV show’s for them. I wanted to just kind of give them a glimpse of how I live and what’s going on. So it’s because of them that I do what I do.”

One Reply to “Jessica Simpson Bares All With In This Skin”