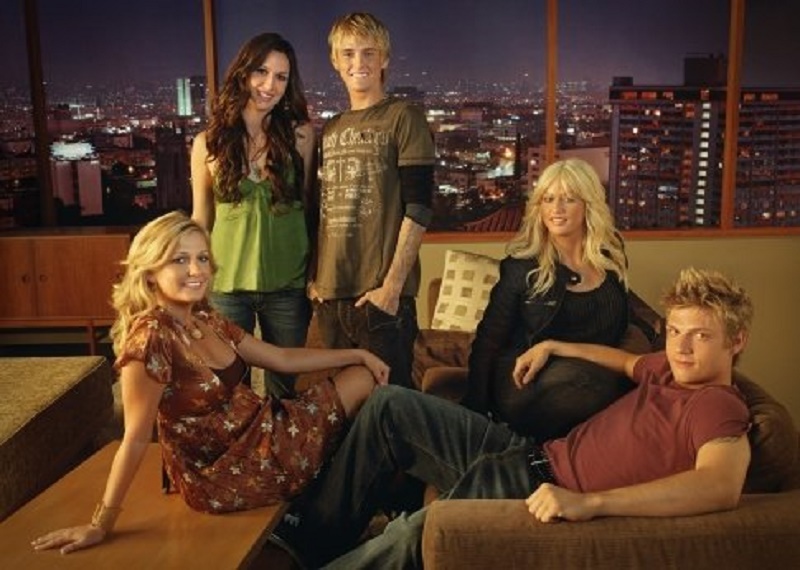 Sandy: After filming, what do you feel the biggest accomplishment is that you achieved as a family?
BJ: As a family we definitely achieved reuniting each other. What we’ve done is we’ve become closer together. We actually hang out more and we have a better understanding of each other.

Sandy: Now with so many reality shows, you know that some of it is staged or exaggerated. How much of that is true for “House of Carters”?
BJ: None of it is true as far as being a staged. Being in our house created a lot of tension for all of us. So our feelings and our emotions got exaggerated within ourselves. There were times where we overreacted on certain things, but none of it was staged. I wish I could say that some of it was! I do, I really do! [laughs]

Sandy: While you’re watching the show do you now look at yourself and are like, ‘oh God, I’m so stupid’ or ‘I shouldn’t have said that’ or ‘what’s wrong with me’?
BJ: Um, sort of, I guess, but I don’t watch the show. I haven’t watched the show one time. That’s really one thing I can control. I don’t have to watch it, I lived it. I don’t need to go back and re-live it. It’s in the past for me. But sometimes I am like, ‘oh my God, what did I do?’ Like I have a boyfriend right now and we’re having problems and a lot of it is because of the show.

Sandy: Aww, I’m sorry to hear that.
BJ: But there were problems before that, but now we got more so…that’s life.

Sandy: When you’re famous or you have a famous family, things like that happen all the time.
BJ: Yeah. Everything in my life has always been a challenge. It’s like basically I feel like life is just testing me to see how far it can push me. I mean I’m proud of who I am and what I’ve become. I wouldn’t change anything for the world. I like to be challenge.

Sandy: Well, good for you. So what can we can expect from you career-wise. I know you’re the only one who doesn’t actually want to be in show business.
BJ: I don’t, but now I feel like I’m being pushed into it a little bit. I’ve actually become a lot more comfortable with cameras, where I used to be really, really shy around the cameras. Being stuck with them in your face twenty-four hours a day pretty much kind of forces you to lighten up a bit. So I mean I’m pretty much open for anything that comes my way. But as far as what I really want to do is…I’m working on a book right now–the story of my life. It might actually be a series of books. I don’t know if I can fit it all into one. That’s a life long dream. It was something I always wanted to do and now I feel like I have the opportunity to express myself. The person I am…I am a very emotional person, I know that, but I’m a very honest person. I’m true to myself. I’ve always been and that’s something I take pride in. You know, sometimes I act a little impulsive. I act on my emotions a lot, but I’m a woman, you know, we do that.

Sandy: [laughs] Yes, we do.
BJ: And I have yet to have a man really challenge me with that. [laughs] But I’m working on my book and still doing my cooking. I’m really just trying to find the time to pursue that more. It’s really a hard career to get into, especially now with everything going on. I mean that’s something that will always be there waiting when I want to do it. I take a lot of pride in cooking for my family. I enjoy seeing them eat. It’s actually the time when there’s the most peace. [laughs]

Sandy: Are they brutally honest with you about your cooking?
BJ: Oh yeah, there have been a few times where I’ve messed up. I’m normal, I can burn the bacon like everybody else, and I have on camera. I’ve burnt myself on camera, too. I went down to light a cigarette off the stove and burnt my chin, so you should expecting to be seeing a big scar in one of the newer episodes coming up. I’m the biggest klutz in the world. I’m the biggest klutz and the biggest dork that you probably ever met. I have no style and no grace.

Sandy: [laughs] Oh come on, there’s so many people out there who are klutzy, you’re not the only one.
BJ: [laughs] You know…it’s fun. I have a lot of battle wounds.

Sandy: Where do you hope “House of Carters” will take you personally and professionally?
BJ: Well, first and foremost, personally it’s already brought us to a whole other level. Me especially with my family. I went through a period of time where I felt shut off from my family and I didn’t realize at the time that that’s how they felt, too. That we all felt the same and all we needed to do was get together and feel free to express ourselves and that we don’t have to hide the way we feel. I try to teach everyone in my family that if you just talk about things and you get them out, whether they’re good or bad, at least you get them out and then you move onto the next thing. You don’t sit there and dwell on things, you have to talk about them otherwise the problems will never go away. All of us have just really learned to communicate with each other and it’s SO amazing! It really is.

Sandy: Aww. Now do you guys plan if the show goes well, which so far it seems like it is, do you plan to do another season?
BJ: Um, I guess so! There was some talk about it and I’m pretty much the go with the flow kind of girl. I mean I had a blast doing it. It was really fun. It was definitely an experience. I mean how many people can say that for a period of two months, they had their life completely documented?

Sandy: It’s pretty cool. It’s like your own little scrapbook.
BJ: I’d definitely do it again.

Sandy: Is there anything you want your audience to know if they haven’t watched “House of Carters” yet or some of the things they’re going to see. Do you want them to know something about you before they watch it?
BJ: You know, I just really want everyone to know I’m so sick of this word, “dysfunctional”. I just think that everyone needs to sit back and realize that no one is perfect and that we’re human beings. There’s nothing wrong with being a little bit dysfunctional. I think that normal is dysfunctional in my opinion. [laughs] I really do. If there is a normal family out there, there’s something wrong.