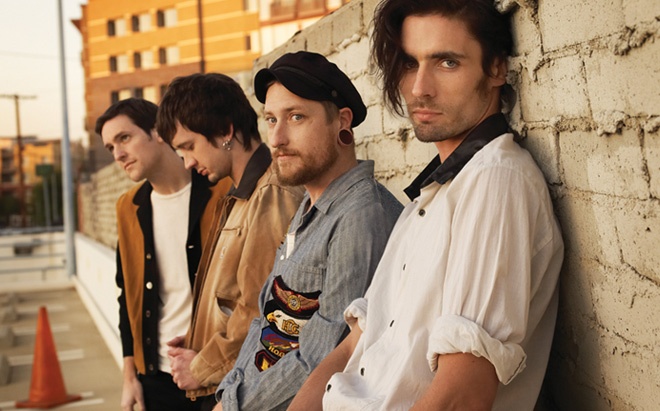 Yes, I confess–in the past 48 hours I have fallen in love.  It’s like a dirty little secret I can’t hide any longer.  Surely, I’ve been in like with this reject for about ten years when he explained how he was crushed by a former love on the “American Wedding” soundtrack.  I was motivated by him when he told me to move along, but yesterday, it all changed when Tyson Ritter walked into a coffee shop in Nashville.

Before I knew it, [Tyson Ritter] offered to put me on the guest list for his show the next night!

As most know, I’m kind of a jill of all trades–novelist, journalist, publicist and yes, barista.  Well, imagine my surprise when my eyes met Tyson’s as he stood on line to get his green tea latte.  Instantly, I recognized him–I had even met Tyson and the other All-American Rejects in a press room a few years ago, but now, here he was while I donned an apron ready to take his order.  I figured it would be all business.  He’d tell me the details of his beverage.  I’d ask if he’d like anything else.  We’d finish the transaction and I’d say “That lead singer of The All-American Rejects is just a normal guy.”

Well, Tyson Ritter is anything but normal, and I mean that in a good way.  After I took his order, the beautiful-eyed, smooth voiced, talented man asked me about my plans to watch the Super Bowl.  We made small talk back and forth.  Before I knew it, this guy offered to put me on the guest list for his show the next night!  Incredibly sweet, right?  But I don’t think that was even the moment I got in too deep.  No, it was the next night at Exit/In in front of thousands of AAR fans who had long ago fallen completely head over heels for Tyson Ritter.  Who could blame them?  I don’t know how I didn’t succumb to his powers before.  Then again, this was my first Rejects concert…I never threw myself into the belly of the beast until now.

My plus one, Kindell, and I quickly realized what we were in for when the band took the stage.  Nick Wheeler, Mike Kennerty, and Chris Gaylor make up the rest of the band and are all incredible musicians; I can’t fail to mention that.  The sound was practically flawless.  Tyson was the perfect entertainer.  He sang–not just screamed–rocked the guitar, and spastically danced around the stage, which seemed to make the audience feel comfortable doing the same!

The sold-out crowd sang along to hits like “Swing, Swing”, “Dirty Little Secret” and “It Ends Tonight”, but even songs that weren’t singles received just as much attention.  The band’s newest release, “Beekeeper’s Daughter” was definitely one of the favorite songs of the night.  I wound up downloading the song as soon as the show was over.  “Beekeeper’s Daughter” is now available on iTunes and will be on the band’s upcoming album Kids In The Street.  AAR debuted the song of the same name for us, and we were hungry for more.

One of the biggest highlights of the show was when the band performed “Move Along”.  Tyson got so into the song that underneath all of his jokes, and crazy-eyed looks, lies a true artist with plenty of heart.  I mean, who else offers their barista free tickets?  Come on now!

What better way to end the show than to perform “Gives You Hell”, the ultimate hate anthem that’s catchy enough to make you feel good about singing it.  To be honest, I can’t remember the last time I went to a pop/rock/punk show and truly loved it from beginning to end.  I have seen a lot of concerts over the years with StarShine Magazine, but The All-American Rejects really proved to be something more than I ever expected.

Like I said earlier, I was always in like with AAR, but now…I fell in love with a bunch of rejects, and I’m really okay with that.

I hope somewhere Tyson Ritter is reading this, and appreciates my opinion as both a journalist, and now, as a big fan.  Thank you for hooking me up!

For more info on The All-American Rejects: www.allamericanrejects.com