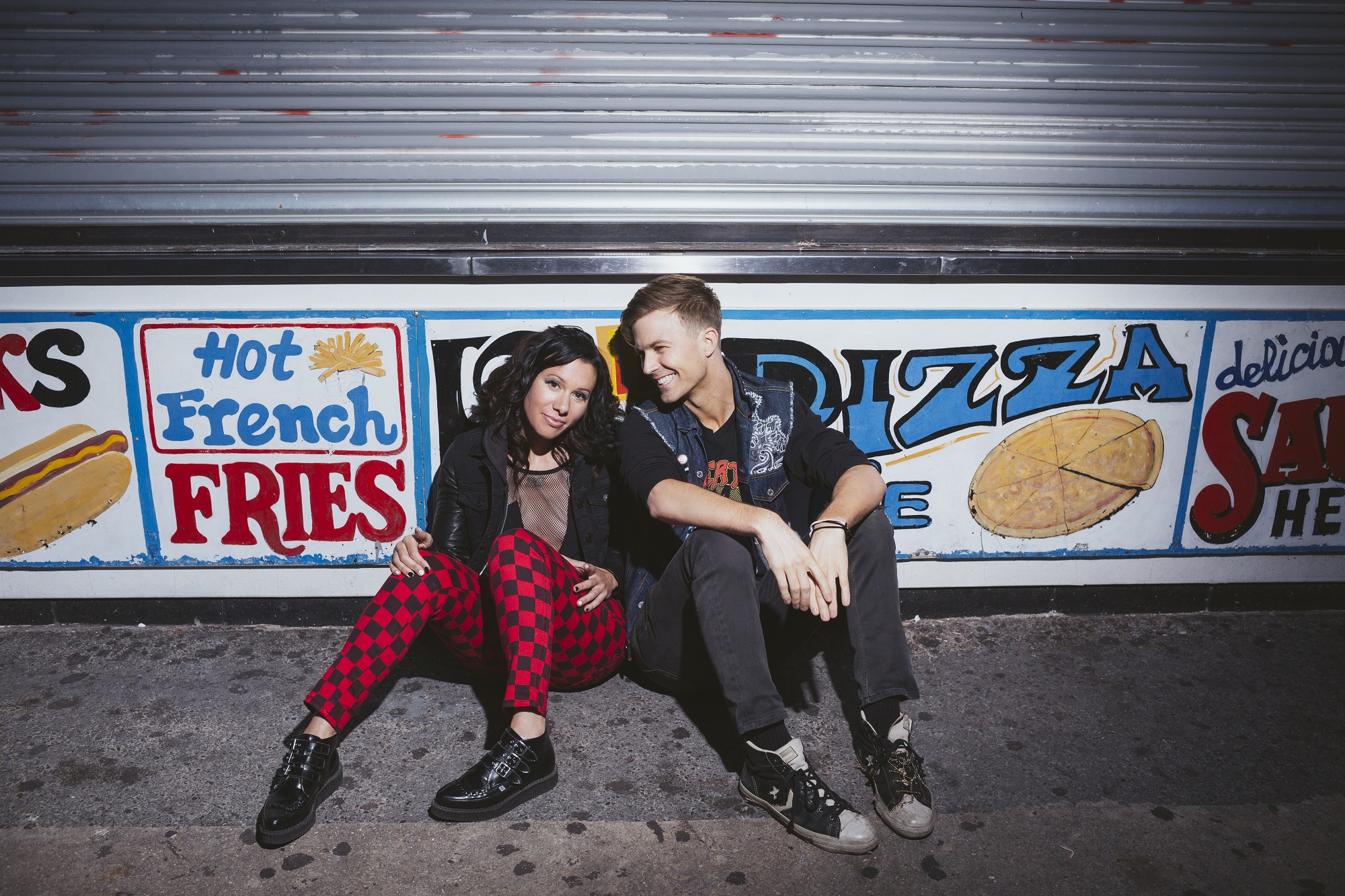 Before you read anything, watch the “Get It” lyric video! Why? 1. Because the song is awesome and catchy. 2. Because it’ll make you want to see Matt And Kim live. THEN you can read on for all of the info on their upcoming album, New Glow and tour dates!
Brooklyn indie dance duo Matt and Kim release New Glow, the band’s latest full length on April 07th, 2015. Fans who pre-order New Glow through their official online store will get exclusive ticket access for the Spring tour starting January 13th. See tour dates below.
Matt and Kim, aka Matt Johnson (vocals/keyboards) and Kim Schifino (drums), get things rolling in their exuberant style with a performance lyric video for the song “Get It”: Three minutes and seven seconds of heaven for anyone who has, or hasn’t yet, seen Matt and Kim’s legendary live shows. Watch HERE.
“Anyone who has seen us knows we love any style of music you can have fun and get wild to. I’m not sure we were able to put that diversity on any of our albums the way we did on New Glow. While there are definitely songs that will feel familiar to people who know our stuff, there are also songs like “Get It” which have always been part of who we are but went unrecorded to this point.”
“We helped edit a lyric video for “Get It”, using live footage from a handful of festivals and shows we played in the last couple years. Going through that footage really made it hard to believe how lucky we are to have the best f**king job in the world.”
With New Glow, the duo who love hip-hop and pop have made an album of undeniably catchy beat-driven anthems with hooks that just don’t stop and just won’t leave your head. “The best era of music is right now and we’re doing our best work yet,” said Matt.
The two met while attending Pratt Institute and quickly became known for their thunder-punching, melodic mix of indie and dance music. Right off, Spin said “there truly is no sound these two won’t use to support their almost religious commitment to spreading huge grins,” while Pitchfork described their quality as “melody so happily jerky and rhythms so dangerously spastic that you can practically hear paroxysmal crowds pogo-ing madly…Johnson sings, and thousands of other kids in his zip code (and others like it around the country) feel like he’s describing their Saturday nights.”
Previously, Matt and Kim’s video for “Lessons Learned,” in which they strip naked in Times Square on a very cold February day, won an MTV Music Award for “Breakthrough Video.” 2012’s Lightning (FADER) featured the Alternative radio hit “Let’s Go” and single “Daylight” was certified Gold.
All the while they toured the globe, becoming the go-to band for raw exuberance, bombastic beats, sing-along refrains and dance-ready anthems on larger and larger scales. They’ve performed at many, many major music festivals including Lollapalooza, Bonnaroo, Coachella, Firefly, Summerfest, Big Day Out, Fuji, V, Pukkelpop and Ultra.
Get on board: Matt and Kim’s Spring 2015 tour:
04/15 Norfolk, VA NorVa
04/16 Columbus, OH LC Pavilion
04/17 Philadelphia, PA Electric Factory
04/20 Asheville, NC Orange Peel
04/21 Atlanta, GA Buckhead Theater
04/23 Austin, TX Stubbs
04/24 Dallas, TX House of Blues
04/25 Houston, TX House of Blues
04/27 Phoenix, AZ Marquee
04/28 Los Angeles, CA Fonda Theatre
04/30 Santa Ana, CA Observatory
05/01 San Diego, CA North Park Theater
05/02 San Francisco, CA Warfield
05/04 Salt Lake City, UT The Depot
05/05 Denver, CO The Ogden
05/08 St Louis, MO The Pageant
05/09 Nashville, TN Marathon Sun
05/11 Washington, DC 9:30 Club
05/14 New York, NY Terminal 5
05/18 Toronto, ON Danforth Music Hall
05/19 Cleveland, OH House of Blues
05/20 Detroit, MI Royal Oak Music Hall
05/21 Chicago, IL Riviera
05/22 Minneapolis, MN Mill City Nights
CONNECT WITH MATT AND KIM:
http://mattandkimmusic.com
Twitter | Facebook | Instagram | YouTube