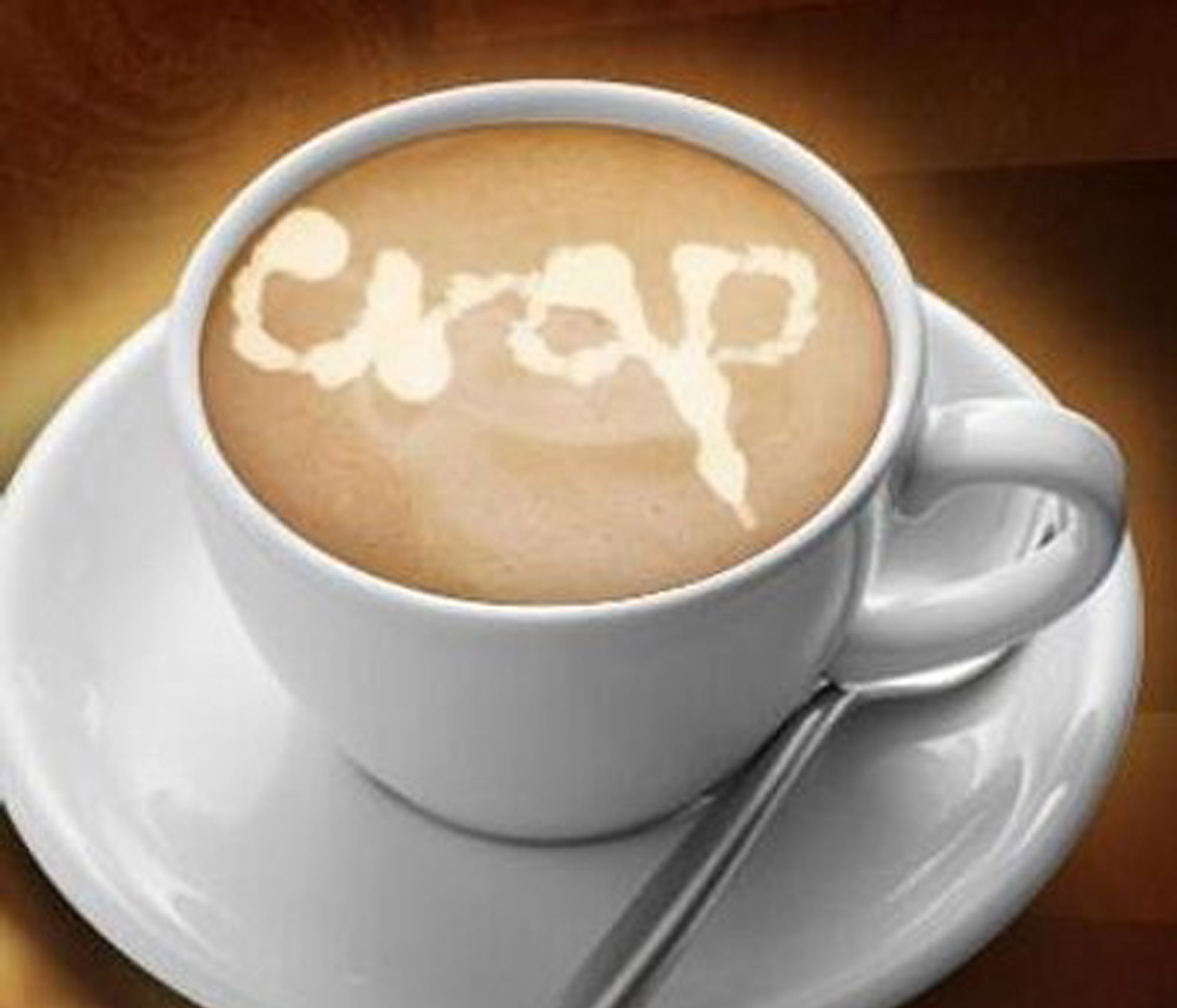 I’ve seen plenty of lists of things that annoy baristas on sites like Buzzfeed.com.  Most of them consist of complicated orders.  For me, I could care less how complicated your order is.  Baristas are guilty of the most complicated of orders.  It’s all in how you order.  It’s also in how much sense your drink actually makes!

My list doesn’t piss off all baristas, I’m sure, or even most of them.  These things really just upset me, the eco-friendly, on a health kick, vegan.  But I figured I’d share and see what you guys think of these things. I apologize in advance for the sarcastic and judgey undertones you’re about to read.  If you do any of the following things, please know I mean no harm, but you might want to look into the health effects some of these things could possibly have.  Or if you don’t care, just laugh it off and call me a preachy, bitter barista.  I know I sound ridiculous, but after 8 years of serving coffee and after learning about so many different health issues, this is what gets me.

Without further adieu, in no particular order, here are things that I silently sneer at.

Even sleeves are a waste to me.  Most drinks, (regular coffee/Americanos aside) I find don’t need a protective covering so your hands don’t burn.  But I get it.  Not everyone’s hands can handle the heat.  But why isn’t that little piece of cardboard enough protection for you?  Okay, go ahead and waste another cup for your morning coffee if you must.  Wait, you want it double cupped AND a sleeve?  Now, you’re just being ridiculous.  But the people who really kill me?  Those customers who can’t stand their cold beverage cup sweating.  Oh no, you have condensation on your hands! Gross.  Or the other reason for these prima donnas (usually college girls, please excuse my stereotyping), is that the cup is just too cold.  Really?  First world problems much?

2. Asking for a Straw for Your Hot Beverage.

Don’t get me wrong — I love drinking through a straw!  However, plastic straws are made for COLD drinks.  There is  even a warning on most straw wrappers: Not Intended For Hot Beverages.  There is a reason for this.  Plastic melts!  And sure, your straw looks in tact, but are you forgetting that whole plastic emitting gas thing?  I just fear all the cancer cells being activated every time you drink your double tall vanilla latte.

3. Wanting Cream on the Side.

This is usually a drive-thru issue.  “Can I get extra cream on the side?”  On the barista end, we wind up giving you an 8 ounce cup of half & half.  Not only is my eco-brain yelling “wasteful” for that cup and the plastic lid (and possible splash stick to go inside the cup) that we’re giving you, but for the extra cream that is also probably going to waste.  Instead, you could come inside and prepare your coffee with just the right amount of cream without wasting all that paper, plastic and that poor cow’s secretions. (Sorry, that last part is the vegan in me feeling guilty for even serving all things I don’t agree with! 88 days until I stop going against my ethics.) “What the heck are these?” You ask.  Oh, just a cup of whip cream for your dog.  Seems innocent enough and it’s oh so cute watching that little beagle’s snout in the cup, covered in white sweetness.  So I guess that adorableness overrides the fact dogs shouldn’t have milk products?

5. Bringing Your Own Cup, but Not Wanting to Use it.

“I have my own cup, but can you just put my drink in a paper one?”  No joke, I’ve had more than one customer ask me that.  And then to follow with, “I can still get the discount, right?”  No, you can’t!  I then politely explain, “The cup discount is because you would be saving our company a cup.”  I then usually mutter something about saving the Earth, but they never care about that.

6. Adding Artificial Sweetener to Any Beverage.

I realize so many people still use Splenda, Sweet & Low and Equal.  As I choke on the fumes while opening your 5 packets of Splenda for your latte, I wonder if you just assume you’ll get cancer anyway, and might as well speed along the process, or you’re just unaware.  What I really don’t understand is the people who order a Mocha (or any flavored latte) and want to add a packet of Equal in there as well.  So now you want regular sugar AND aspartame?  WHY???

7. Getting A Half Nonfat/Half Soy Latte.

Sometimes I think I understand this logic, but then, no, no I don’t.  At all.  First, let me explain soy milk is not a “low fat” or diet beverage.  Especially not the one at Starbucks.  It’s vanilla soy – added sugar.  Nonfat milk also has added sugar, by the way.  Soy milk is simply an alternative to milk, not a better choice calorie wise.  Anyway, I never understand what one tries to accomplish with getting soy milk to save calories, fat or sugar.  But then again, I can’t understand the benefits of nonfat milk anymore either.  But to mix the 2 in your 12 ounce drink?  Maybe just stick with the standard 2% milk then?  Whatever.  I’m lost.

Okay, so did you actually stick a thermometer in your drink and decide such a specific number is the perfect temperature?  Do you even know what happens when we steam milk to temperatures past 180°?  It overflows the pitcher and practically burns, losing most of its frothy consistency.  Also, if we steam your beverage below 120°, it allows bacteria to form inside the milk.  Maybe just stick with the terms “kid’s temp” (140°) and “extra hot” (180°) just to be safe and less annoying.

9. Asking for the light version of a drink and still wanting whip cream.

This doesn’t nearly bother me as much as it used to.  Why?  Because it’s so freaking common now for people to do this that I just roll with it.  Let people think that whip cream (made with vanilla and heavy cream) isn’t going to pack on calories/fat/sugar into your caramel frappuccino light.  Speaking of, those light beverages are made with both aspartame and regular sugar, and now you just added the worst thing of all onto it — the whip cream (roughly 100 extra calories).  Don’t blame me when you crash hard after that sugar rush, gain weight from all the dairy/sugar, and are constantly hungry because of the aspartame. (I’m talking to the people who think it’s okay to consume such a beverage everyday.)

10. Asking for an extra shot of espresso in a drink that does not get espresso.

“Can I get an extra shot in that iced coffee/frappuccino?”  Um, well, neither of those drinks get shots of espresso to begin with.  Why are you ordering an “extra” one?  The way people word things confuse me.  Or are they confused?  I don’t know.  I’m just a barista who’s ready to throw in the apron.

Ask me in three months if these things still bother me while I’m visiting other coffee shops as a customer.  I’ll probably say yes, but at least I won’t feel like their crack dealer anymore!

3 Comments on “10 Things That Miff Your Barista (Correction: Your Vegan Barista)”